O’Connor hungrier than ever

James O'Connor insists he has never been more keen to represent the Wallabies. [more] 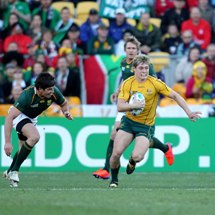 James O’Connor insists he has never been more keen to represent the Wallabies.

With the Lions tour to now less than 10 months away and the new Rugby Championship all set for kick off, O’Connor is still sidelined with a hamstring injury.

The setback forced him to miss all four summer Tests against Scotland and Wales and has ruled him out of this Saturday’s clash with the All Blacks in Sydney and the following week’s return fixture in Auckland.

O’Connor admits missing out on the chance to add to his 37 caps is hard to take, especially as he was playing such a pivotal role in helping the Wallabies claim their first Tri Nations crown in a decade this time last year.

"It's been frustrating because 2011 was a massive year for me. I learnt a lot and got to play a lot of rugby," said O’Connnor, who is desperate to return to action when host in on September 8.

"I hadn't really been injured too much (before this year) so it's been a bit different.

"I want to be out there playing rugby. I've never been more hungry to get out on the field.

"When you start setting dates that puts pressure on. I'd love to play in that test (against the Boks) but I'll leave it at that."

As for where he wants to play when he does finally return to the side, O’Connor has made it clear that he hopes to be involved in midfield.

The 22-year-old has played the majority of his international rugby on the wing but has spoken previously of his desire to have more of an impact from the No12 position.

And with current first-choice inside centre Pat McCabe out injured with a stress fracture of his leg, O’Connor could well have his wish granted sometime next month.

"I want to be around the ball a little bit more," added O’Connor.

"My strength and what I can give to the team is that second ball player role. That's where I'd like to play."