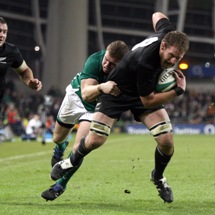 The cross-Tasman rivals clash in the inaugural Rugby Championship on Saturday, with Read back in the starting line-up following injury.

And the No8 has pulled no punches about what he views as the Wallabies' Achilles heel.

"You play against Australia and that's the area you want to target them," said Read.

"We want to play our kind of game, which is all about starting with the forward pack and setting the standard there."

But the Crusaders star is well aware of the risks of underestimating the Wallabies forward ability.

He has warned that Robbie Deans' men are some of the most street-wise in the game and have the ability to cut any team to shreds.

"The Aussies are very smart in what they do," said Read.

"You can't just turn up and expect to go with them. It's always hard to really dominate them, especially over there.

"They'll try to play with the ball a lot more and try to stretch you. It's a quick game as well so you prepare accordingly."

Read has played no rugby since he fractured a rib playing for the Crusaders at the beginning of July.
He the Crusaders' final three matches of the season but has put the time off to good use and is raring to go.

"I don't feel like I need the games to get back up to that level," added Read.