Wallabies must work together

Wallaby wing Adam Ashley-Cooper knows he and his backline team-mates will have to be as one to topple the All Blacks. [more] 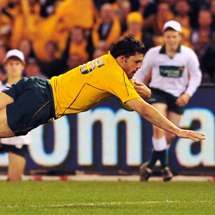 Wallaby wing Adam Ashley-Cooper knows he and his backline team-mates will have to be as one to topple the All Blacks.

Australia take on the World Champions in Sydney this Saturday as they look to start the inaugural Rugby Championship campaign in the same way they ended their victorious 2011 Tri Nations tournament.

The All Blacks have picked a giant midfield in the shape of Sonny Bill Williams and Ma’a Nonu and have pace to burn out wide courtesy of Cory Jane, Hosea Gear and Israel Dagg.

And with Dan Carter looking to control things for the Kiwis from fly-half, Ashley-Cooper is under no illusions as to the size of the challenge facing the Lions’ next opponents.

"I think across the board, it's still going to be a very tough job for us," said Ashley-Cooper, who played the majority of the Super 15 season in the centres but joked that he’s more than happy to avoid direct confrontation with Williams and Nonu this weekend.

"They have got a really deadly attacking back three in the likes of Israel Dagg, Hosea Gear and Cory Jane. They played some really good football throughout the Super 15 and throughout the Ireland series.

"Every Test team has their generic attacking shape. I think with Sonny and Ma'a, they are some of the best midfielders in the game.

"Obviously, the combination of those two is fairly new. But that certainly won't deter from the fact they are a great midfield pair and great inside backs.

"I'd certainly prefer to be out there than in the midfield to contain those two! For us, Anthony Fainga’a and Rob Horne have got a real job on their hands Saturday night.

"We just have to work as a unit because, if we don't, they are going to expose us."