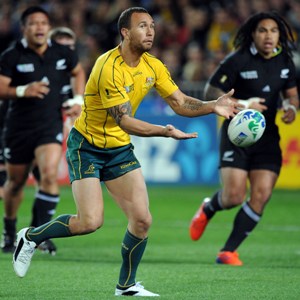 The Queensland Reds fly-half was left out of the Wallabies side that fell to a 27-19 defeat in Sydney.

But he has been drafted in to the starting line-up, with Berrick Barnes moving from fly-half to inside centre.

Flying wing Mitchell has not played for the Wallabies since an appearance against Russia during last year's World Cup.

He has taken Beale's place in the starting line-up but has backed his former Waratahs teammate to bounce back.

"It's quite obvious he was disappointed with how he went but the boys have every faith in KB bouncing back," said Mitchell.

"He won't get the opportunity at the start of the match this weekend but I'm sure when he does get his chance he'll show he's the world-class player we all know he is.

"At any point where you play lower than the standard you expect from yourself you're going to be disappointed. I'm sure there's an element of (loss of confidence) but he's also a pretty confident fella.

"He's got a lot of confidence from the blokes around him in his ability so I'm sure he'll bounce back."