Rathbone comes out of retirement

A former Wallaby winger is making a sensational return in time to face the Lions. [more] 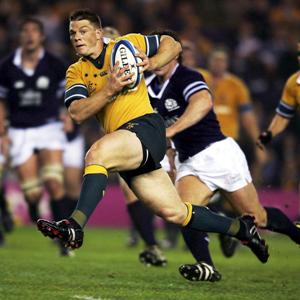 A former Wallaby winger is making a sensational return in time to face the Lions.

Clyde Rathbone retired from rugby three years ago but has now announced a dramatic U-turn after agreeing a one-year deal with his old club the Brumbies.

The 31-year-old will be contracted up until the end of the 2013 season, meaning he could well line up against Britain and Ireland’s elite in Canberra on June 18.

Rathbone won 26 caps for the Wallabies after switching allegiance from his native South Africa but serious knee problems cut a stellar career short in 2009.

That looked to be that for the former Baby Bok star but the man who led him to Junior World Cup glory in 2002 has now persuaded him to attempt a remarkable comeback.

Jake White took over the coaching reigns at the Brumbies last season and wasted little time attempting to persuade Rathbone to return, even if Rathbone himself wasn’t too keen on the idea to start with.

"I initially turned him down, but it stuck in the back of my mind," said Rathbone.

"It's a bit surreal – I don't think there's too many guys who've had that long out of the game. It's a bit of a freak thing.

"There's a lot of reasons why it might not work, but I think it can.

"I wouldn't be putting my body through it all and doing all the training and all the preparation and having a full crack if I didn't think it was possible.

"I'm not coming back to make up the numbers. Like all the players here I've got goals and objectives, I want to meet those targets in 2013 and contribute to this team.

"If I come back and I play every game next year, or if I don't get through the pre-season, I just want to make sure I've done all the work.

"If it works out that's fantastic and if it doesn't, I can sleep at night knowing I did everything I could."

Current Brumbies backs coach Stephen Larkham is convinced his former team-mate will make a real impression next term, with the legendary fly-half even suggesting that the best of Rathbone may be yet to come.

"He's stronger than he ever was, he's almost as quick as he was and (Brumbies strength and conditioning coach) Dean Benton thinks he can get even quicker," added Larkham.

"And Clyde brings a bit of that South African mentality – he's really tough and tries to run over blokes before he'll run around blokes."