Will Genia has backed Queensland Reds teammate Quade Cooper to produce the goods upon his Australia recall. [more] 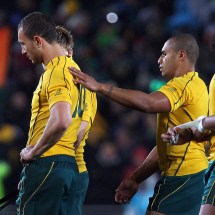 Will Genia has backed Queensland Reds teammate Quade Cooper to produce the goods upon his Australia recall.

The illustrious playmaker was left out last weeks 27-19 defeat at the hands of New Zealand in Sydney.

But he has been called back for the return match at Eden Park, a venue in which the Wallabies last beat the All Blacks 26-years ago.

Cooper was given a rough ride by All Blacks fans in Auckland last year but Genia is confident the maverick fly-half can turn their fortunes around.

"I think the greatest strength Quade brings to our game is just his communication and his organisation," said Genia.

"He gives the guys a lot of confidence inside and outside him because they know where they're going and they have clarity on direction and play.

"We just have to enter the game with the right frame of mind and that means blocking out external pressures and worrying about what's important."

After his worst performance in a Wallabies jersey in the 27-19 loss to the world champions last Saturday night, Beale was dropped from the starting side on Thursday.

Meanwhile the Wallabies have now named their replacements bench for the clash with Kurtley Beale retaining his place in the squad despite his horror show in Sydney.

Reds flanker Liam Gill is in line to make his debut off the bench, alongside fellow forwards Saia Fainga'a, James Slipper and Radike Samo.

Nick Phipps and Anthony Fainga'a are also in the squad but Waratahs hooker Tatafu Polota-Nau has missed out after failing to recover from injury.