Lions wing Leigh Halfpenny has been racing against a horse in a new advertising campaign for the WRU. [more] 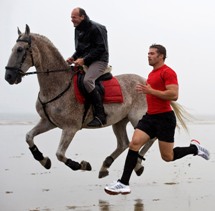 Lions wing Leigh Halfpenny has been racing against a horse in a new advertising campaign for the WRU.

The 2009 British & Irish Lions tourist is one of a hand-full of Grand Slam heroes taking starring roles in a publicity campaign for Wales' November internationals, which end with a showdown with Australia

Halfpenny shot his item on a beach in Rest Bay, Porthcawl and was asked to race a galloping horse as the film director pits man against beast to symbolise the physical conditioning required for a modern athlete to compete at the very highest level.

The strapline for the campaign is ‘Our Land, Our Way’ and is designed to inspire the whole of Wales to get behind its national side.