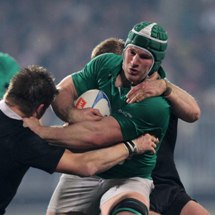 The Leinster flanker has had two separate operations to cure a hip problem, with the most recent taking place just over a week ago.

O’Brien had originally been scheduled to return to action towards the end of October after he initially went under the knife in late June but that date has now been pushed back.

The star blindside is expected to be out of action until the middle of December, meaning he won’t be able to feature when Ireland take on South Africa and Argentina in November Tests, as well as Fiji in a non-cap match.

"It will be a long, slow process. There weren't any complications.

“It was two different operations. We're hoping he'll be back mid-December."

That return date would mean Leinster will play at least the first three games of the defence of their Heineken Cup crown without one of their most influential players, with the Round 4 clash with Clermont Auvergne at the Aviva Stadium on December 15 looking like O’Brien’s first real chance of a comeback.

O’Brien has forced his way into Lions reckoning after really coming of age in the three years that have followed the last Lions adventure.

The now 25-year-old was uncapped when Britain and Ireland’s elite were in South Africa in 2009, with Declan Kidney handing him his Ireland debut in November of that year.

O’Brien has become a central figure for his country since starting every game of the RBS 6 Nations in 2011 and is among the early favourites to feature when the Lions head to Hong Kong and Australia next summer.