Lions tourist Harry Ellis says staying fresh and finding time to switch off will play a key role in a successful series Down Under next summer. [more] 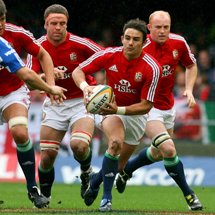 Lions tourist Harry Ellis says staying fresh and finding time to switch off will play a key role in a successful series Down Under next summer.

Former England scrum-half Ellis travelled to South Africa with Britain and Ireland’s elite three years ago for an adventure that was seen as a huge step forward despite a heartbreaking 2-1 series defeat to the Springboks.

While the then World Champions may have edged the first and second Tests by a combined total of nine points, the latest line up of Lions restored a huge amount of pride into the red jersey after a frustrating series whitewash by the All Blacks back in 2005.

A record-equalling 28-9 victory in the third rubber was just reward for the Lions’ efforts across the 10-match tour but it was off the field as well as on it where the spirit of the world’s most-famous touring team was rekindled.

The unity in the Republic matched that of the famous 1997 adventure to the same nation and there was no sign of the disgruntled media misgivings that reared their ugly heads on the 2001 tour of Australia.

Whereas a number of tourists from 2001 had complained of an overbearing workload, Ellis claims there were no such issues in 2009. Instead, the 30-year-old ex-Leicester Tiger insists head coach Sir Ian McGeechan got the balance between hard graft and having fun just right at the end of a long season.

“I’d never been on a Lions tour before but people said it was a bit of an old-school tour. The training was short and sharp, there was a lot of downtime, a lot of time to get to know the other players and it was a very, very enjoyable tour,” said Ellis.

“When you play at your club, you live at home, you sleep in your own bed, you train two days then have a day off to switch off, before training again and then playing at the weekend.

“In an international week or a tour it’s very difficult to switch off. You only learn with experience how to do that. It’s not like you can go and climb a mountain on that day off – you’ve got to rest, watch what you eat and it can be difficult to do that.

“You just try and switch off, try not to think about your rugby and that’s how I coped with it. You learn with experience what makes you tick and what makes you play well and, for me, not losing a lot of nervous energy in the week is how I played better at the weekend.

“There was a lot of time for relaxation and that was really important, especially after a long season. For some people it was the 11th month in a row that they’d been playing or training so you want to take those opportunities for rest when you get them to make sure you work as hard as you can during the time you’re on the pitch.

“The conditioners, the medical staff, the management – they all bought into that and created a big, team ethic. We had fun of the pitch as well as on it. There was a lot of banter, a lot of camaraderie and a lot of decent down time – that’s what makes a good tour.”

Spending time together as a group and experiencing plenty of the sites South Africa had to offer was an integral part of the most recent tour but Ellis insists there was never any pressure to do anything he didn’t want to do.

Activities and events were organised to give the players and staff the chance enjoy their surroundings yet what each person wanted to do with their time was largely left up to the individual.

“There were organised trips and there were optional events but sometimes you just want to switch off and not do anything and sometimes it’s nice not to have any agenda or schedule. That’s how it worked – there were sheets up in the team rooms that gave you choices for different day trips but it was optional, you didn’t feel obliged to do anything,” added Ellis.

“Getting out visiting people, visiting landmarks and experiencing the culture over there was important. You’ve got to be professional and make sure you don’t use too much energy doing other things but you’ve still got to make sure you sample the culture. South Africa’s an amazing country and I really look back on the tour with some great memories.

“The one regret I do have is that the night before one of the games the lads who weren’t involved went on a shooting trip. Looking back, I wish I’d gone on that. They got back in at about half past 12 and before a game I like to be in bed quite early, but I wish I’d joined them.

“A tour like that is all about mutual respect between the coaches and the players. You know not to take the mick. If I was going out the night before a game, I wouldn’t drink. You’ve just got to gauge things properly and be professional.

“But it was really refreshing having family and friends there just to help you switch off in South Africa. Even when you have a day off, you’re still sometimes around the team hotel and you’re still seeing the people you’re working with day in, day out so a change is good as a rest.”

Ellis was one of the few tourists who could actually claim to have enjoyed a rest before the tour began.

A 10-month absence with a serious knee injury meant he only played a bit part in the 2008 season, while Julien Dupuy’s fine club form saw him used a lot less than usual after he returned to Leicester having been recalled to the England starting line up in the 2009 Six Nations.

Even though the Tigers made it through to the Heineken Cup Final at Murrayfield that year and delayed his arrival at the Lions’ training base at Pennyhill Park, Ellis travelled south fully fit and feeling fresher than he had felt for a number of seasons.

“I was really fresh when I went on that Lions tour. I’d been on the bench for the Heineken Cup Final, had the weekend off and was the third scrum-half with the Lions so had another couple of weeks off where I was either not involved or on the bench in South Africa. I was fresh and raring to go.

“That did help. You only get about three weeks off in a year between the end of the season and pre-season and by the time you hit that third week you start feeling guilty about not doing anything so you start training again early.

“And pre-seasons are tough. The training you do is like playing a game and the physicality and intensity you train at is like a game, too.

“So having a bit of a period in a season where you have a couple of weeks off is great – you come back refreshed, you’re able to switch off mentally and you come back in a good place. That was how I was feeling when I went away with the Lions.

“A tour like that is a long time to be away as well, so again that rest and freshness helped. You’re away for seven or eight weeks, living out of a kit bag and a hotel room and that can be hard mentally after a long season.”