The Head Coach for the 2013 British & Irish Lions tour will be formally announced at the Ironmonger's Hall, London, on Tuesday, 4 September. [more] 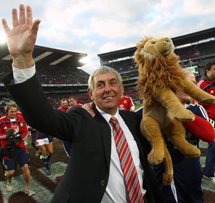 The Head Coach for the 2013 British & Irish Lions tour will be formally announced at the Ironmonger’s Hall, London, on Tuesday, 4 September.

The appointment will come after the opening weekend of the season in the UK and Ireland and will be the 14th of its kind. Former Wales Grand Slam prop, and 1950 Lions Test player, John Robbins was the first man to be given the job of coaching the British & Irish Lions.

He took charge on their 35 match, five month tour of Australia, New Zealand and Canada in 1966. His official title was ‘assistant manager’ and the captain, Michael Campbell-Lamerton, still had ultimate responsibility for preparing the side, but it was at least a nod in the right direction of the need for a coach.

On Tuesday, 4 September, 2013 Lions tour manager Andy Irvine will announce the Head Coach for next summer's 125th anniversary tour to Australia. Whereas the first seven coaches had to look after everything on their own, the new man will have a highly qualified team around him down under next year.

Where Robbins led, seven further ex-Test Lions have followed down the years. In fact, only Carwyn James (1971) and Graham Henry (2001) of Lions coaches were not tourists themselves during their playing careers.