The countdown to the 2013 British & Irish Lions tour begins in earnest this weekend with the big kick-off in the UK and Ireland. [more] 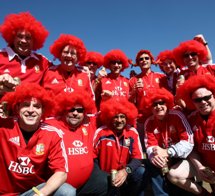 The countdown to the 2013 British & Irish Lions tour begins in earnest this weekend with the big kick-off in the UK and Ireland.

From tonight onwards there will be one ultimate goal in the minds of all the professional players in England, Ireland, Scotland and Wales – to win a place on the plane to Australia for the Lions’ 125th anniversary tour.

And it won’t just be the players who will be thinking about a trip down under. Tens of thousands of fans will be following the Lions around Australia, with millions more back home willing them to win the Test series against the Wallabies.

You can register for the Official British & Irish Lions Newsletter service that will take you through all the way to the end of the 2013 tour by joining us on Facebook. You can also register your interest by using the button on the right hand side of the home page on the website or by clicking the link http://www.lionsrugby.com/hongkong

It will have been 12 long years next summer since the Lions last faced the Wallabies – and even longer since they last won a series. The last series victory was over the then World Champions, South Africa, in 1997 when England’s mighty Martin Johnson was at the helm.

Johnno was also captain on the 2001 tour to Australia, when the series went down to the wire in the third Test in Sydney. A record crowd for a Lions fixture, 84,188, watched the Wallabies hang on to deny the Lions and win their first Test series against their British & Irish rivals with a 29-23 win at Sydney’s Stadium Australia.

And now the time has come for another thrilling adventure for the best players from England, Ireland, Scotland and Wales. That great Scottish full back and wing, three-times tourist Andy Irvine, will act as the Team Manager and on Tuesday, 4 September, the Head Coach will be announced.

Until then, and all the way through to July, you can keep up to date with what’s going on with the Lions through the following channels: