Warren Gatland has been given the seal of approval by the king of Lions coaches, Sir Ian McGeechan. [more] 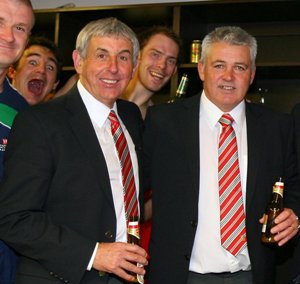 Warren Gatland has been given the seal of approval by the king of Lions coaches, Sir Ian McGeechan.

No one knows more about the pressures of coaching the Lions than ‘Geech’ who led the touring team to two Test series victories and enjoyed four turns as Head Coach and a fifth as an assistant.

He was in charge of a coaching team in South Africa in 2009 that included Gatland as forwards coach and grew to admire his understudy during the battle with the Springboks.

“Warren was brilliant in South Africa in 2009 – I can’t say enough about him. He understands the Lions ethos and has huge respect for it,” said McGeechan.

“He was a brilliant assistant coach three years ago, but he knows all about being the No 1 guy after so many years in that position with Connacht, Ireland, London Wasps and Wales.

“He was always the outstanding candidate for the top job in Australia next year. He has a great rugby brain and he is a good man manager.

“The other great thing about Gats is that he shares things and is prepared to put everything out there on the table. He gets huge respect from the players for that."

“He has the ability to pull players together. He has coached in Ireland, England and Wales and he has always taken on board the strengths and ideas from those countries.

“He has become used to working with players from different countries over the past 14 or so years and has always learned along the way. That’s such a critical issue with the Lions.

"You have five or six weeks in which to build a team before the first Test and that means you need to keep things simple and straightforward. Warren will have to blend a new group of players in Australia and I don’t think there is a better man for the job.

“I know the way I felt when I got the Lions position for the first time. It is something you never dream of doing, but when you get the chance you quickly realise the enormous responsibility that comes with the job and the fantastic feeling of excitement.”