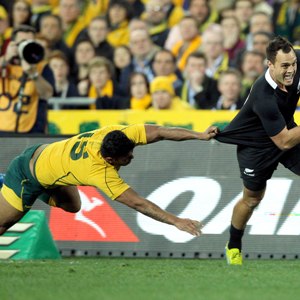 The Rebels full back has been recalled to his country’s starting line up after being dropped for the Round 2 defeat to New Zealand in Auckland.

Beale, who won the John Eales Medal as the Wallabies’ best player in 2011, endured a nightmare start to the new tournament when he had a game to forget in the opening fixture on August 18.

The 23-year-old copped a whole load of criticism for his defensive frailties against the All Blacks in Sydney but Deans believes that showing was a one-off.

"I don't think you'll see a performance like that from Kurtley again," said Deans, after picking Beale for Saturday’s must-win fixture in Perth.

"He's too good a player for a repeat of that. He's in a better space.

"He's working hard on and off the field. He's doing his homework, making sure he's around the detail, which helps a lot in terms of positioning – you're less likely to get exposed.

"It was just one of those nights. It goes from bad to worse and just compounds. It's in the past fortunately. I've seen a player that's very keen not to have a repeat."

Beale has been named alongside Digby Ioane and debutant Dom Shipperley in the Wallaby back three as the Lions’ next opponents look to put their 27-19 and 22-0 loses to the Kiwis behind them.

Shipperley suddenly has a chance to push for permanent selection after injuries to Drew Mitchell, Joe Tomane, Cooper Vuna and James O’Connor opened the door to Test-match rugby.

The 21-year-old admits he’s currently on cloud nine, although he won’t be getting too carried away or attempting to do too much at Patersons Stadium.

"It's a pretty special feeling. It's one of those things you never forget," said Shipperley.

"I just want to do my job. You can't go out and expect to set the world on fire in your first Test."

"He looked like he put on half a yard at training."

For a look at the full Wallaby line up, just click here.