Lions coach Warren Gatland hopes to have his backroom staff in place prior to the start of the autumn internationals. [more] 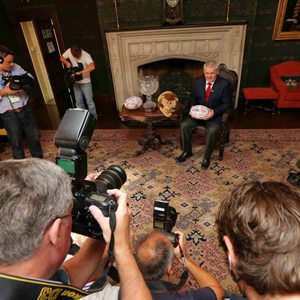 Lions coach Warren Gatland hopes to have his backroom staff in place prior to the start of the autumn internationals.

Having been formally announced as the man to lead the Lions Down Under yesterday, Gatland was typically up front and honest when asked about the timescale of appointing the other coaches he wants to work with in Australia and Hong Kong.

“Ideally we’d like to announce them before November,” said Gatland, who was himself an assistant coach to Sir Ian McGeechan when the Lions travelled to South Africa three years ago.

“In the next couple of weeks I’ll talk to some potential coaches to see if they’re interested and then put a list of names together so (Lions chief executive) John Feehan can start approaching unions and clubs about releases.

“If we could get that done and finalised before November, that’s the ideal time frame.

“We’re a long way ahead of where we were last time. I think the first selection meeting for 2009 was after three games of the Six Nations.

Gatland hinted that we can expect to see some familiar faces involved in 2013 after the class of 2009 attempted to re-establish the traditional values of the world’s most-famous touring team.

Much was made of the close-knit atmosphere last time out and Gatland is looking for more of the same next summer.

“It’s about trying to get some continuity from the last tour but it’s also about getting the best people for the job as well,” added Gatland.

“One of the lessons we learnt from 2009 about the Lions as a concept is that, for it to be successful, you want some continuity in terms of management and coaches.

“But you’ve also got to have fresh faces – that’s important. We need a mix in terms of the coaching, management and other roles to reflect the four nations.

“One of the things we spoke about on the last tour with Sir Ian McGeechan was getting back to the old traditions of what the Lions is all about.

“It’s about not picking too big a squad, having the players room together, getting out doing school visits, hospital visits and community stuff.

“But I’m well aware of the expectations of going to Australia. We’re aware that it’s also about going out there and playing an attractive style of rugby. I thought we did that in South Africa. We played some outstanding rugby and were pretty unlucky.”