The man filling David Pocock's huge shoes for the Wallabies reckons their next opponents could be vulnerable at the breakdown. [more] 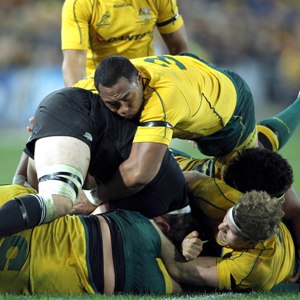 The man filling David Pocock’s huge shoes for the Wallabies reckons their next opponents could be vulnerable at the breakdown.

Pocock has established himself as the new king of the ruck and tackle area but the stand-in Wallaby skipper’s knee injury has handed youngster Michael Hooper a chance to make his mark in the lead up to the Lions tour.

Hooper, who is leaving the Brumbies for the Waratahs while Pocock heads to Canberra next term, started the 22-0 defeat to the All Blacks a week-and-a-half ago and is now preparing to take on the Springboks this Saturday.

The Boks have picked a monster back row for the trip to Perth but head coach Heyneke Meyer has opted against selecting a specialist seven – something Hooper hopes will play into his favour at Patersons Stadium.

"I guess when you're going for a turnover or putting your head in the breakdown, they come in flying," Hooper said of the size and power of the Bok back row.

"But in saying that, you've got a bit of an opportunity, a bit of a window to force a turnover, because they are bigger blokes.

"They will probably be a step or two [slower] than if they were playing a traditional No7.

"It’s a different challenge in that they're going to use force rather than having that real on the ball player like a Heinrich Brüssow.

"There's opportunities there, but you've got to be prepared to be belted."

The Boks have long been known for their uncompromising approach and Hoper is expecting an even bigger battle than normal in his first Test against South Africa given the physicality of flankers Duane Vermeulen and Willem Alberts and No8 Marcell Coetzee.

"The contact is a massive thing in South African games," added Hooper.

"They're a bigger pack, which brings a different style of how they're going to attack using more force than skill.

"Each year over there we played the Bulls and the Lions in very physical games.

"In saying that though, there's areas we can work to avoid those big contacts and get some pay out of it."

As for the Bok view on the back row, Meyer admits his combination isn’t perfect but he is convinced they won’t be found wanting on Australia’s west coast.

"The one thing we don't have in our back row which is a bit of a concern is out and out pace," said Meyer.

"But I think we make up for that with muscle and a big work rate.”