Warren: what the papers said

Warren Gatland's selection as Lions head coach for next summer's 125th anniversary tour to Australia has proved a popular move with the press. [more] 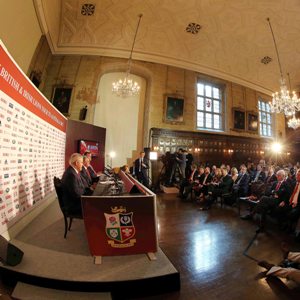 Warren Gatland’s selection as Lions head coach for next summer’s 125th anniversary tour to Australia has proved a popular move with the press.

A whole host of national newspapers, TV channels, radio stations and websites turned up to hear the announcement at Ironmonger’s Hall in London on Tuesday and the general consensus is that Britain and Ireland’s elite are on to a good thing.

Gatland talked of his honour at being chosen to lead the Lions’ pride, the need for continuity, discipline and a blend of nationalities in the squad, the huge challenge of attempting to beat the Wallabies in their own backyard and the difficulties of creating a successful side in such a short time frame.

Here’s what the papers said about the appointment of the New Zealander, who led Wales to Grand Slam success earlier this year and has also coached at Connacht, Ireland, Waikato and London Wasps…

“The Kiwi certainly ticks enough boxes. His successes with Ireland, Wasps and Wales stand first and foremost but there is also his stint as assistant to Ian McGeechan on the 2009 Lions tour to South Africa and even his experiences on the other side of the fence to the famous tourists. All the indications are that ‘Gats’ gets the Lions.

“Though he was always the standout contender for the role of head coach for next year’s seven-week tour to Australia, he had to satisfy the Lions’ bigwigs that he was fit and able to assume the reins after the horror fall that left him with two broken feet during the summer.

“The challenge for the best players from England, Ireland, Scotland and Wales now is to prove that they, too, are fit for purpose.”

“By appointing Warren Gatland as head coach the top brass have made exactly the right call.

“Gatland’s experience on that Springbok trek three years ago gave him two things: an understanding of the Lions dynamic and the confidence to make a strong pitch for the top job when it came up for grabs.

“He is indeed the man for the job.”

“It was a day to revel in the delicious prospect of all that is to come. Gatland, despite still limping from a double heel fracture, is very much up for the job. A Kiwi he may be. From now on, he is a Lion.

“Gatland is too savvy to get lured into too many traps, realising that he has got his own difficulties to deal with. Discipline is just one of them, with the harmony of the squad an integral precursor to success. Amid all the fluff and flannel that attends these Lions gatherings, it was a stark statement of intent.”

“With his background, the New Zealander, who led Wales to a second Grand Slam in four years last season, is well attuned to the peculiar demands made of a Lions coach. There has to be a balance and mixture of nationalities. The squad, which he said will be about 35 strong and will each receive the same flat fee, must reflect that.

“Discipline and character traits will have a heavy bearing on his choice. No potential troublemakers will be included, however talented they might be."

“Warren Gatland is already having to confront the complications that make coaching the Lions the most difficult of jobs. Despite the tour to Australia still being nine months away he will struggle to find the preparation time the seconded Wales coach both wants and needs.

“There has been no movement on the end of the domestic season, meaning the grand finals in England and the Celtic countries grossly intrude on his plans. If there is nothing new in this, the migration of leading Welsh players to France presents a new problem which could well mean Gatland leaving behind those he would otherwise regard as first choice.”

“Once the formal appointment of Warren Gatland as head coach had been confirmed, attention turned to his vision on how to make the class of 2013 successful Down Under.

“A vital factor was the ability to steer clear of the kind of trouble which stalked Martin Johnson’s England team during their stay in New Zealand a year ago. Tour manager Andy Irvine was emphatic in his belief that in Gatland the Lions have the best man for the job. Yet he made a special point about professional conduct and the Kiwi’s track record in enforcing it.

“Gatland joked his Lions role was a ‘poisoned chalice’, given the swift demise of others who have taken it on in the modern era. Yet, there can be no doubting his resolve to restore the famous touring team to former glories.”

“Gatland straddles the hemispheres, having spent most of his playing career in New Zealand and most of his coaching years in Britain and Ireland. He is the second Kiwi to become the Lions head coach but he does not consider himself an outsider and as a New Zealander in Australia he will expect a partisan home media cranked up by John O’Neill, the Chief Executive of the ARU.”

“Warren Gatland read the riot act just minutes after being confirmed as Lions coach. And the no-nonsense Kiwi insists he will not stand for the sort of behaviour that blighted England’s World Cup campaign last year.

“Gatland, 48, led Wales to the World Cup semi-finals and last season’s Grand Slam. But the Lions have not won a series since South Africa in 1997 and the former All Black hooker says he has taken on a tough job.”

“Within minutes of being officially anointed as the new “Lion King”, Warren Gatland confirmed that he is to fly to the country possibly least concerned with the British & Irish Lions tour to Australia next summer.

“Gatland is heading to France this weekend to begin the process of identifying contenders for the 2013 tour and to ascertain who may or may not be available from French clubs, with the Top 14 Final clashing with the Lions’ historic stop-over tour match in Hong Kong.

“Such a priority sums up both how professional the whole Lions concept has become and how meticulous Gatland is set to be. His appointment launches a new year of Lions anticipation. The focus now turns to the players who would be Lions.”

“Warren Gatland cut a proud figure in the rarified surroundings of the Ironmonger’s Hall as he was finally able to wax lyrical about a job conveyed on so few in the rugby world.

“Gatland exuded a mix of humility and excitement at the task – to engineer the first Lions success since 1997. He will never have been in so much demand for his thoughts on so many different topics and in his usual honest and frank way he didn’t duck any of the key issues.”