Harry Ellis is the latest Lion to give his backing to Warren Gatland having experienced his coaching first-hand on the 2009 tour to South Africa. [more] 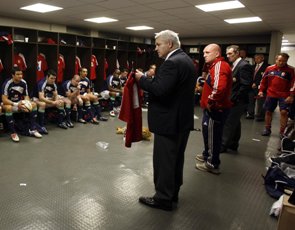 Harry Ellis is the latest Lion to give his backing to Warren Gatland having experienced his coaching first-hand on the 2009 tour to South Africa.

Ellis, who won 27 caps for England and one for the Lions before retiring in 2010, was one of three scrum-halves in the squad when Gatland was an assistant to Sir Ian McGeechan three years ago.

The 30-year-old has played under a whole host of top coaches in his time with Leicester, England and the Lions and he believes Gatland’s no-nonsense approach can lead Britain and Ireland’s elite to a series victory in Australia in nine months’ time.

“He’s somebody who gets straight to the point and gets his point across very well. What he says is very precise and he’s also a very good motivator.

“He’s very much like Johnno (Martin Johnson) in that what he does says is no-nonsense and very matter of fact. He’s very open and honest and that’s what you want from a coach. You don’t want someone who talks for the sake of talking.

“It was a pleasure working under him. He’s a very good man manager and he knows his stuff. He’s an outstanding coach.

“When I played for the Lions, I knew of him as opposed to knowing him but I knew he’d done a good job at Wasps and had a good pedigree.

“He coached the forwards more than the backs in 2009 but all-in-all he was a very good coach and I’m sure he’ll do a great job in Australia.”

Gatland may be a New Zealander but he’s spent most of his coaching career in Ireland, England and Wales and Ellis insists the 48-year-old is fully up to speed with what it means to be a Lion.

The fact that Gatland won 17 caps for the All Blacks also adds to his kudos among the players – something which Ellis reckons will be another big bonus Down Under.

“He’s worked very closely with Rob Howley and Sir Ian McGeechan who’ve been there and done it for the Lions.

“He knows what the Lions is all about and he understands what it takes to get success over a short period of time. He gets what you need to do to blend a team from four different nations and I’m sure he’ll do that very well next summer.

“He’s also played the game to a very high level and you have a lot of respect for a guy like that.

“If you’ve got someone you don’t respect and you don’t have a lot of time for, that can affect you negatively, but it wasn’t like that with Warren. It was all very positive and he was one of the big reasons why the last tour was a success, even if we didn’t win the series.”