Genia ruled out for six months

Will Genia is likely to be sidelined for up to six months after rupturing the anterior cruciate ligament in his right knee in the Wallabies' 26-19 win over South Africa in Perth. [more] 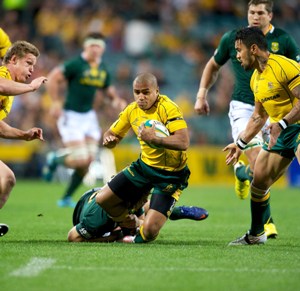 Will Genia is likely to be sidelined for up to six months after rupturing the anterior cruciate ligament in his right knee in the Wallabies’ 26-19 win over South Africa in Perth.

The Queensland Reds scrum half becomes the third Australian captain to pick up a major injury as he followed in the footsteps of James Horwill (hamstring) and David Pocock (knee) in limping out of the Test arena.

It means the 24-year-old will be out of action until the start of next year’s Super 15 campaign. He will miss the remainder of the Rugby Championship and the Wallabies Autumn tour.

It took his half-back partner Quade Cooper seven months to return from a similar injury after rupturing his right ACL in the World Cup third-place playoff against Wales in October 2011. Cooper missed most of the 2012 Super 15 season for the Reds.

With the British & Irish Lions heading to Australia for a three match series next summer, Wallaby coach Robbie Deans will want to make sure one of his prime assets is fighting fit by June, 2013.

"I don't think we'll have a formal leader any more – every person we've given the title to has broken down, so we might just have someone lead the group out the tunnel and have a meeting with a few good men on Monday morning to discuss the week,'' said Deans.

"Will Genia is not there and Will Genia is a special player, there's no doubt. But as we've seen in recent times it's a team game and no one can do it by themselves and the group that combines effectively is more dangerous than one man.''

Australia’s injury woes didn’t end with Genia’s knee problem. Lock Sitaleki Timani picked up a serious hamstring strain which is likely to sideline him for this weekend’s clash on the Gold Coast with Argentina.