John Eales says Australia's win over South Africa on Saturday was an encouraging one even if there is still plenty to improve on. [more] 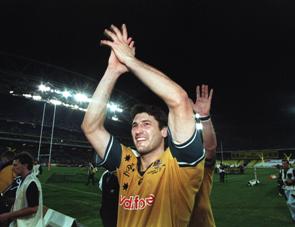 John Eales says Australia’s win over South Africa on Saturday was an encouraging one even if there is still plenty to improve on.

The Wallabies bounced back from successive slip ups against the All Blacks to secure a 26-19 victory that lifted some of the doom and gloom that had become common place in the Australian press.

Eales, who skippered the Wallabies to series glory when they last faced the Lions in 2001, feels there was plenty to be proud of at Patersons Stadium in Perth.

“It may not be nirvana just yet as they didn't eradicate much of their popgun kicking but in a heartening display their play was infused with much clearer structure and purpose,” Eales wrote in the Sydney Morning Herald.

“Granted, the Boks don't pose the same threat as the All Blacks at the moment. But they remain a formidable rugby nation so the Wallabies' current six from seven run of Test victories against them is impressive.

“More impressive was the manner of this victory, coming back from a 10-point deficit and holding on desperately to contain the final green onslaughts.

“The performance may have been more relieving than perfect, but it demonstrated character which, due to the latest bulletin on the injury front, is timely.”

The latest injury news that Eales talks of concerns scrum-half Will Genia, who faces six months on the sidelines after rupturing his ACL.

Genia is the third Wallaby captain to suffer a long-term setback this season after James Horwill and David Pocock succumbed to hamstring and knee problems respectively.

Eales admits that replacing one of their stand-out players and filling the leadership void at the same time may now be the most demanding task for Robbie Deans and co as they prepare for a home tie with Argentina and then away fixtures against both the Boks and Pumas.

“The loss of Will Genia for six or more months to a knee injury is a particularly bitter pill,” added Eales.

“While aspirants will often lift themselves and grasp their opportunity, replacing Genia is not just a matter of teaching someone else to toss a coin.

“Genia is central to the heart, soul and conscience of this Wallabies team, and his resilience has ensured that they haven't had to do without him for some time.

“One postscript to his absence is that it may provide the opportunity for Nathan Sharpe to step up as Wallaby captain once again – a fitting responsibility for a man who continues to perform so consistently in his final handful of games.

“And leadership may be the biggest challenge for the Wallabies next week. At the beginning of this season we were excited by the calibre and attitude of leaders such as James Horwill, David Pocock and Genia. Now all three are on an expanding long-term injury list.”