Consistency the aim for Cuthbert

Wales wing Alex Cuthbert is looking to add an even greater consistency to his game as he targets a Lions place in 2013. [more] 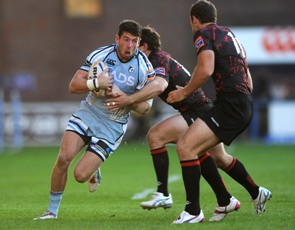 Wales wing Alex Cuthbert is looking to add an even greater consistency to his game as he targets a Lions place in 2013.

Cuthbert burst on to the scene last season after being plucked from relative obscurity to feature as a replacement in his country’s December defeat to the Wallabies.

The 22-year-old went on to play in all five of Wales’ Grand-Slam winning fixtures, scoring the tournament-clinching try in the final game with France.

Cuthbert’s stunning showing last term has led to talks of a place on the plane with Britain and Ireland’s elite next summer but the Gloucester-born Blues flyer insists dismissing talk of second-season syndrome with a series of strong performances on the pitch is the only way he will have any chance of achieving that aim in Australia.

“It’s every rugby player’s dream to play for the Lions and obviously it’s in a lot of people’s minds,” Cuthbert, who picked up a try and the man-of-the-match award in the Blues’ 21-19 loss to Edinburgh, told Wales Online.

“But my main aim is just to play well for the Blues and get selected for the autumn Tests with Wales and play well then.

“If you play well for Wales, you never know what happens there. I don’t want to look too far forward.

“People have been saying about that second-season syndrome, which is annoying, so hopefully I have put that to bed now and I can push on.

“I feel refreshed. I came back flying last week and I was looking forward to the game.

“My confidence is quite high and I’m enjoying my rugby. I’ve been training hard in pre-season, just working on my weaknesses and my all-round game.

“I want to be a bit more consistent and solid as a winger and try and cement that place for Wales by playing well for the Blues.”

The Blues may have been beaten on home soil last Friday but Cuthbert says there’s still a good feeling in the camp after a summer of substantial change in the Welsh capital.

While the likes of triple Lions tourist Martyn Williams and former All Black No8 Xavier Rush retired, Casey Laulala headed to Munster and Gethin Jenkins signed for Top 14 finalists Toulon, the Blues brought in Phil Davies as director of rugby and moved back to their spiritual home of the Arms Park following a stint at the Cardiff City Stadium.

“Phil has been a breath of fresh air. He’s brought in a new culture and way of playing rugby. Everyone is enjoying it,” added Cuthbert, who was himself linked with a switch to France with Racing Metro and Toulon.

“We’ve got a young team and the boys are progressing and playing well. We are playing the right brand of rugby. It’s just about putting it together and executing it.

“You could feel the atmosphere at the Arms Park (on Friday) and you could tell how much it meant to the crowd. It’s their home ground and it’s been a long time waiting to come and play there.

“We’re all looking forward to the Dragons game at Rodney Parade next weekend – that’s a big derby. It’s going to be a good atmosphere and hopefully we can get a win and get back on track.”