The 2013 British & Irish Lions will be hoping to get their hands on the Tom Richards Trophy for the first time in Australia next summer. [more] 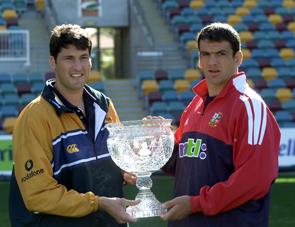 The 2013 British & Irish Lions will be hoping to get their hands on the Tom Richards Trophy for the first time in Australia next summer.

The magnificent Waterford crystal trophy was commissioned in 2001 when the Lions last toured Australia and was presented to Wallaby skipper John Eales after his side won the series 2-1 with a thrilling 29-23 victory in the third Test at Sydney’s Stadium Australia.

It was the first time the Wallabies had won a Test series against the Lions and the trophy was presented to Eales in front of a crowd of 84,188 – the largest official attendance at any match involving the Lions.

The Tom Richards Trophy will once again be up for grabs in 2013 as it is named after the only man to play for both the Lions and the Wallabies. He was also an Olympic Games gold medallist in 1908 with the Wallabies.

Born on April 29, 1882, near Tenterfield in New South Wales, Richards was the son of a wandering Cornishman who went to Australia during the "Gold Rush". Known as "Rusty", Tom began playing football in Charters Towers, following in the footsteps of his elder brother Bill, who made the first of his five Test appearances for Australia against the 1904 Lions and faced the tourists four times on that tour.

Tom’s appetite 'for the glory and the glamour of a footballer's life' was whetted when he saw a New South Wales Rugby Union team playing. He joined the local Waratahs team in 1898 and the next year began a successful career with the Natives club.

In 1902 Richards represented Charters Towers against other towns. He played in Brisbane for the Northern District and Country 'B' (1903) and for Queensland 'Next Fifteen' against New South Wales (1905).

Hearing of plans for an Australian team to visit Britain, he returned home in July, 1907. His strong performances for Queensland ensured his selection for the tour to Britain, France and North America. A big, fast, versatile and opportunistic breakaway forward, with a natural rugby brain, he played against Wales and England, scoring a try at Cardiff Arms Park in a narrow 9-6 defeat.

He was also a member of the gold-medal-winning Australian team at the London Olympic Games in 1908, when they ironically beat his father’s home county, Cornwall, who were representing Great Britain as the champion English county.

Richards returned to Australia in March 1909 and that year captained and coached Charters Towers and North Queensland. He sailed to South Africa during the visit of a British team in 1910 and in Johannesburg was invited to join the tourists when injuries struck. He played in 12 games, making his Lions Test debut against the Springboks on 6 August in a 14-10 defeat. He then helped the Lions win the final test 8-3.

Back in Sydney in June 1911, Richards played for Manly, for a Metropolitan XV and for Queensland. In 1912 he was vice-captain of the Waratahs team that toured North America, playing in the Test against 'All-America'. He returned to England before heading to the south of France with an East Midlands team in February, 1913. He helped to train France for its match against Wales in Paris, played for Toulouse and briefly lived in Biarritz. He retired from rugby after returning to Australia in August, 1913, when he began to write for the Sydney Morning Herald, the Referee and other newspapers.

Giving his occupation as 'traveller', Richards enlisted in the Australian Imperial Force on 26 August 1914 and in October sailed for Egypt with the 1st Field Ambulance. Landing at Gallipoli on the morning of 25 April 1915, he served as a stretcher-bearer, and was mentioned in divisional orders in July for 'acts of gallantry'. He returned to Egypt in January, 1916, and in March left for the Western Front. On 25 November Corporal Richards was commissioned second lieutenant and on 2 December transferred to the 1st Infantry Battalion.

In May, 1917, near Bullecourt, he led a 19-man bombing party on a raid that earned him the Miltary Cross. The citation in the Gazette of 16 August, 1917, read: “For conspicuous gallantry and devotion to duty. He was in charge of a bombing party, and despite strenuous opposition succeeded in extending the line 250 yards and holding a strong post. He set a splendid example throughout.”

Richards was promoted to Lieutenant and was twice evacuated to England with his back and shoulders damaged by a bomb blast. His A.I.F. appointment was terminated on 3 November, 1919, and for two years he was in charge of the employment section of Sydney’s Department of Repatriation. Thereafter, he became a travelling salesman.

He died in Brisbane on September 25, 1935, suffering from tuberculosis, admitting "the gas I swallowed during the war is beating me down steadily."

Tom Richards is the subject of an outstanding new biography written by the Sydney Morning Herald's Chief Rugby correspondent Greg Growden to be published soon by ABC Books.