Genia goes under the knife

Wallaby captain Will Genia has today had surgery to reconstruct his right knee. [more] 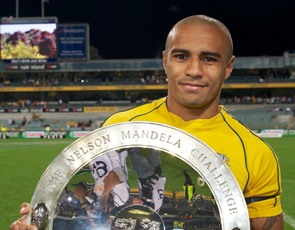 Wallaby captain Will Genia has today had surgery to reconstruct his right knee.

The 24-year-old went under the knife at a Brisbane clinic, the Australian Rugby Union declaring the procedure a success.

Genia is still expected to be sidelined until February at least, though, leaving with just four months to find form and fitness before the three-match Test series with the Lions.

"A full reconstruction was required of the ACL ligament in his right knee after he sustained the injury during last Saturday night's 26-19 win by the Wallabies over the Springboks in The Rugby Championship Test in Perth.

"Today's procedure went well but Genia will now be sidelined for an estimated six months of rehabilitation before he can return to the field of play."

Nick Phipps of the Rebels wears the No9 shirt in Genia’s absence for this Saturday’s clash with Argentina on the Gold Coast, with back up Brett Sheehan from the Force earning a first call up in three years.

Genia’s injury is the latest in a long line of setbacks for the Wallabies who have already lost regular captain James Horwill and stand-in skipper David Pocock to hamstring and knee problems respectively.

Wings Drew Mitchell, Joe Tomane and Cooper Vuna, utility back James O’Connor, second row Sitaleki Timani and back rowers Ben McCalman and Wycliff Palu are all also currently sidelined, although centre Pat McCabe returns to Saturday’s starting line up after recovering from a stress fracture of his lower left leg.