Ferris to hit a hundred

Lions tourist Stephen Ferris is in line to make his 100th appearance for Ulster this weekend. [more] 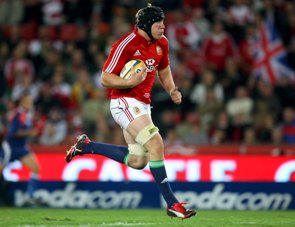 Lions tourist Stephen Ferris is in line to make his 100th appearance for Ulster this weekend.

The star blindside is set to start Friday night’s PRO12 clash with Munster after coming on as a replacement in the 16-13 win at the Ospreys last weekend.

Ferris missed Ireland’s end-of-season tour of New Zealand with a torn calf muscle but is tipped to earn selection for a second Lions adventure next summer.

The 26-year-old was in contention for a Test place when Britain and Ireland’s elite travelled to South Africa three years ago but a knee injury saw his tour come to a premature end.

Making up for that disappointment Down Under is high on the agenda for Ferris but for now he is simply looking forward to another major milestone with his native province.

“I can remember my first cap for Ulster like it was yesterday,” Ferris told Ulster Rugby TV.

“It was with a lot of boys who have now moved on. It was at Border Reivers when they were still in the competition and we had a good win down there.

“That was my first cap back in 2005. To run out in front of a home crowd all these years later against Munster will be brilliant.

“Coming off the bench at the Ospreys last week and getting a good result has made me really hungry for a massive game this week.”

Ulsterand Munster are both unbeaten after two games apiece in the PRO12 this term, with the Belfast boys having beaten Glasgow before toppling the champion Ospreys, while the 2003, 2009 and 2011 Celtic Kings have seen off Edinburgh and Treviso at Murrayfield and Thomond Park respectively.

Ulsterstunned their Irish rivals in last season’s Heineken Cup quarter-final in Limerick and Ferris is hopeful that home advantage this time around will lead to another success.

The Ravenhill faithful have long been renowned for ensuring the Northern Irish capital is a difficult place to play for visiting sides and their favourite son admits that backing provides the players with a major boost in big games.

“I’ve run out at Ravenhill many a time in the dark old days when we were struggling to get 5 or 6,000 on a Friday night against some of the bigger teams, and then I’ve been on the other end of it when I’ve run out in front of 12,500 at home to Clermont and then Leicester for our biggest-ever win over an English team last year,” added Ferris.

“It’s nights like that that you remember before you go out and play against big teams like Munster. You have that in the back of your head when you run out there and hear the Ravenhill crowd getting behind you.

“It’s honestly like an extra seven to 10 points when you’re at home and have a crowd like that getting behind you.”