The Wallabies seem set to be given an extra week to prepare their players for the three-match series with the Lions next summer. [more] 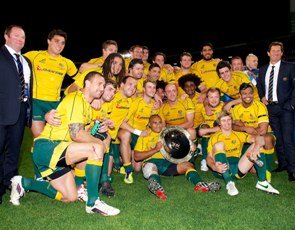 The Wallabies seem set to be given an extra week to prepare their players for the three-match series with the Lions next summer.

The five Australian Super 15 sides could start their season a week before their South African and Kiwi counterparts to ensure they can break a week early prior to the first clash with the Lions on June 22.

Wallaby head coach Robbie Deans has called for a five-week Test window in June and July and he now looks like having his wish granted as governing body Sanzar get ready to release their Super Rugby fixture list shortly.

A preliminary fixture list has been given to the Super Rugby franchises and broadcasters and, although it has yet to be officially confirmed, Sanzar boss Greg Peters has spoken publicly about the need to work with the Wallabies due to the magnitude of the Lions’ visit.

"We are looking to start that Australian conference a week earlier which, in actual fact, means two games between their sides," Peters told Fairfax.

"It's not an ideal situation but it's a compromise that all three Sanzar countries and Sanzar have come to because the Lions is such an important tour.

"He's (Deans) going to get a window – bearing in mind the Australian franchise teams are also playing the Lions, so it is a complex draw compared to a normal year."

The Wallabies face Warren Gatland’s tourists in Brisbane, Melbourne and Sydney on June 22, 29 and July 6 respectively as they look for a repeat of their series success back in 2001.

The Force are the first franchise to host the Lions in Perth on Wednesday June 5, followed by the Reds in Brisbane on June 8, the Waratahs in Sydney on June 15, the Brumbies in Canberra on June 18 and the Rebels in Melbourne in between the first and second Tests on June 25.

The Lions also take on the Barbarians in Hong Kong on June 1 and a combined New South Wales and Queensland Country XV on June 11 at Hunter Stadium in Newcastle.

Last season’s Super 15 campaign kicked on February 24, with the tournament final between the Chiefs and the Sharks taking place on August 4.