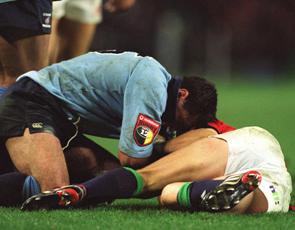 McRae picked up a seven-week ban for raining punch after punch into the Irishman’s face in the British & Irish Lions’ 41-24 victory at the Sydney Football Stadium back in 2001.

The incident provoked widespread condemnation on both sides of the equator and remains an un-savoury talking point 11 years on, especially as the timing of the ban during the Australian off season meant McRae was free to play in the Waratahs’ very next fixture.

And while the 37-year-old is at a loss to rationalise why he acted in such an unsportsmanlike manner, he insists he regrets losing his temper.

''I'd love to be able to explain it, but it just sort of tipped over the edge,'' McRae, who was sent off for the attack, told The Australian newspaper.

''We had a bit of a running battle throughout the game and it boiled over. We were in the same place at the same time and it just sort of kicked off. I've done a few stupid things in my life and that's probably right up there.”

Ronan O'Gara was left battered and bruised after McRae's attack

And it’s not just the way in which his own image and that of the game as a whole was tarnished that still rankles with McRae.

The dual code star made his peace with parts of the British and Irish rugby scene by finishing his career in England with Gloucester but he never had another chance to beat the Lions.

The Waratahs will have had to wait 12 years for another crack at the world’s most famous touring team by the time they face Warren Gatland’s men on June 15 and McRae says that missed opportunity will haunt him for the rest of his days.

''It was such a competitive game,'' added McRae. ''We could have won it if I had stayed on the field. We definitely had a chance to win that game.

''To let the guys down and not win that game…it's something I'll remember for the rest of my life. That's probably the biggest disappointment.

''The excitement of the last Lions tour was amazing. It's just the expectation of a contest and the uniqueness of the Lions and the fact that you never put four nations together – it's incredible.''

Any similar incidents this time around would likely be met with even greater indignation given the amount of social media coverage that now accompanies the game.

McRae received the backing of Waratahs coach Bob Dwyer at the time but he admits he would be vilified on Twitter and facebook accounts all across the globe if he did the same in 2013.

''I'm lucky there was no Twitter back then. I reckon I would have copped a lot of abuse. And I've got to give a lot of thanks to [then Waratahs coach] Bob Dwyer,'' he added.

"There was a bit of a push at the higher levels to maybe get rid of me after that, because it was such a big incident. I can't thank him enough for the amount of support he gave me on and off the field.

''He staked himself for me and I'll never forget that.''