Elsom return not on the cards

New Waratahs boss Michael Cheika says there are no plans in place to bring Rocky Elsom back to Sydney. [more] 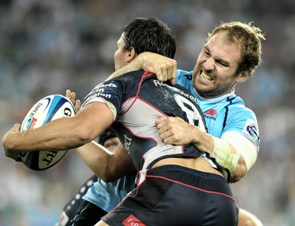 New Waratahs boss Michael Cheika says there are no plans in place to bring Rocky Elsom back to Sydney.

Cheika took over at the New South Wales franchise this week and was immediately linked with a move for the former Australian skipper.

The pair worked together during their time at Leinster – a hugely successful period for both men, with Cheika leading the Irish outfit to a first Heineken Cup crown and Elsom picking up an astonishing 11 man-of-the-match awards in 13 appearances.

Elsom’s career has gone downhill since he returned to Australia, though, with hamstring, ankle and shoulder injuries disrupting his progress.

The 29-year-old lost the captaincy of his country to James Horwill in the summer of 2011 and has since seen a move to Japan fall through after he failed a medical.

And while Cheika is convinced Elsom can rediscover the form that saw Lions legend Brian O’Driscoll describe him as the best player he’d played with, he insists he won’t be doing that with the Waratahs next season.

"What Rocky's got to do is get himself fit," said Cheika, who admitted having dinner with Elsom in Paris last week as the star blindside attempts to pick up a contract in the Top 14.

"He's not fit. He knows it, so he is going to work hard now on his time off to get as fit and healthy as he can.

"I would back a guy like him to be able to find (his 2009 form) again. But there are no plans for him to come back and play.

"I was really interested to read that Rocky is a friend of mine and so on and so forth. I don't want to make this a cliche and say it's not about jobs for the boys but it's all about performance."

The Waratahs finished 11th in the Super 15 standings last season, losing their final eight fixtures of a hugely disappointing campaign.

But despite their poor run of form under former Bath coach Michael Foley, Cheika is convinced there is enough talent in the Waratahs squad to turn things around before they face the Lions on June 15 next year.

"We've got a squad that has a lot of quality. There’s a lot of talent," added Cheika.

"There's no way I'd go to any team if I didn't think the playing potential was there to be successful. If I was coming to the team and looking at the group of players and I don't think they are players I can do anything with, then I wouldn't be coming.

"I'm the most competitive person around. I'd be lying if I said I didn't want to win straight away. You can't go into a tournament and not want to win it.

"I could tell you we are going to win the competition next year, but that's a furphy. We've got to earn the right to win something, each game, each battle."