Former England fly-half Andy Goode says selection for the Lions is more competitive this season than ever before. [more] 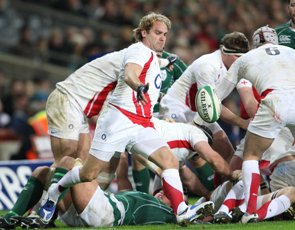 Former England fly-half Andy Goode says selection for the Lions is more competitive this season than ever before.

While the Worcester outside-half might not be in the running for a spot in the squad himself, he believes head coach Warren Gatland has plenty of options in almost every position ahead of the tour of Hong Kong and Australia.

“I don’t remember a time in the history of the Lions when there were more players competing to get on the plane,” Goode wrote in his blog on livingrugby.co.uk.

“The first four weeks of the domestic season has proved there are going to be some incredibly tough choices for the Lions management come the end of the season.

“There is some serious strength coming out of England, Wales and Ireland and I think Scotland's resurgence in the last 12 months could lead to a good few of their boys making it into Warren Gatland’s squad.

“There will be strength in the pack and I will very surprised if Harlequins flanker Chris Robshaw is not being considered for the tour and potentially a captain’s arm band. He has dome a cracking job with England, is a good guy and is well respected within the game.

“I expect a couple of my old team mates at Leicester to feature in the pack too, with Dan Cole almost certain to go and Tom Croft a very good bet after doing so well in South Africa last time around.

“The fly-half slot will be interesting and probably a shoot-out between Jonny Sexton, Rhys Priestland and Toby Flood.

“But England have a very good chance of an excellent representation in the backs with Manu Tuilagi, Ben Foden and Chris Ashton very highly rated.

“I also think a couple of the guys down at Gloucester could find themselves in the mix if they are consistent this season. Johnny May and Henry Trinder may be cast as outsiders but they have pace to burn and could do well on fast Aussie tracks.

“Whatever side they pick, the Lions continue to go from strength to strength in terms of their marketing and the amount of people that are prepared to go and watch them. That is something I can never see changing.”

The Lions haven’t won a Test series since their heroic humbling of the world champion Springboks back in 1997 but Goode can see that stat changing this time around.

The 17-times capped fly-half, who won European, English and Anglo-Welsh honours with Leicester, reckons the Wallabies are there for the taking in Brisbane, Melbourne and Sydney next summer.

“I really rate our chances this time too. Being brutally honest, Australia are traditionally the weakest of the southern hemisphere big guns and they are not playing great rugby at the minute either,” added Goode.

“They don’t seem to know how they want to play the game, head coach Robbie Deans is under some pressure and their player pool is nowhere near as big as New Zealand or South Africa.

“There are eight or nine months to go yet but I think it will be a good time to play them.”