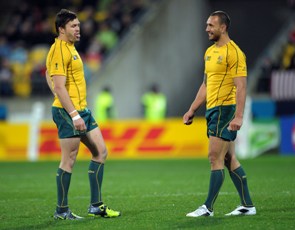 Reds fly-half Cooper described the Wallaby camp as a ‘toxic environment’ but Ashley-Cooper says his side are fully focused on a first win in Pretoria rather than on the latest ill-judged outburst from the injured playmaker.

"This won't be a distraction for us," Ashley-Cooper told a news conference in Johannesburg.

"There's a great buzz in the squad and we're excited to be here.

"We've had two good wins in this competition and we feel we're building as a group.

"Playing at Loftus Versfeld is always pretty tough – you're usually up against quality opposition and a hostile crowd that they feed off. Plus the altitude and the pace of the game there means it's always a challenge.

"A win is something we've never achieved before in Pretoria… so there's a lot of motivation for us."

Australia beat Argentina on the Gold Coast just over a week ago and were victorious against the Boks in Perth seven days earlier but Cooper’s highly-publicised quotes aren’t the only setback they have had to deal with ahead of Round 5 of the Rugby Championship.

The knee injury that has ruled Cooper out of the away games in Pretoria and Rosario is the latest in a long line of problems that has also seen a trio of skippers sidelined in James Horwill, David Pocock and Will Genia.

But rather than make excuses prior to what will be another reshuffle at Thursday’s team selection, Ashley-Cooper says he expects things to be pretty even come the weekend.

"The Springboks are facing similar challenges to us with a lot of injuries and having to give opportunities to younger players," added Ashley-Cooper.

"They are coming off two disappointing losses so they'll be pretty motivated and we expect it to be really tough to win in Pretoria on Saturday."