Nick Easter is determined to regain the England No.8 jersey. [more] 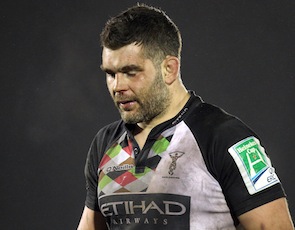 Nick Easter is determined to regain the England No.8 jersey.

The Harlequins star has not pulled on the Red Rose since the World Cup last year.

But he starred in the Quins’ 22-9 victory over Leicester Tigers on Saturday, to stay at the top of the Aviva Premiership and declared his determination to earn an international recall.

“People talk about age but as Mark Evans, our former chief executive, said, it’s not the registration plate, it’s the number of miles on the clock,” said Easter.

“I came late into professional rugby so I am not burnt out mentally and my body is in good nick.

“I am still hugely ambitious and I believe that I am still improving as a player.

“I am also enjoying the way we play; challenging the opposition and being unpredictable. Perhaps, in the past, we have tried to play the off-loading game but didn’t have the mix to be able to scrum, maul and kick.

“Stuart [Lancaster] has not said anything to me this season and all I can do is just carry on and play rugby.”

A return to the England set-up would enhance Easter’s chances of touring with the Lions next year.

Warren Gatland has also stipulated that players do not have to be performing on the international stage to earn selection.
And Quins director of rugby Conor O’Shea insists Easter is comfortably the best No.8 in England.

“For the last year he has been playing absolutely unbelievable rugby for us and long may that continue. I don’t want to comment on other No.8s, all I know is what we see and what we have in Nick.

“He drives the group, he is incredibly ambitious and proud. He has not written off his international career.

“Brad Thorn was older when winning the last World Cup. If Nick can keep himself in shape and plays the rugby he does, he will knock his way back in there.”