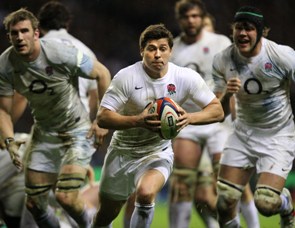 The Leicester Tigers No9 had surgery on a shoulder problem during the summer and had initially been ruled out of action until the end of next month.

That length of absence would have made it hard for the 23-year-old to press for a place in the England lineup for the autumn Tests against Fiji, Australia, South Africa and New Zealand.

But things suddenly look a lot rosier for Youngs, who is now in line to feature for his club side as early as October 5.

Youngs is being penciled in to make his comeback in the Aviva Premiership fixture at Sale Sharks a week on Friday, giving him plenty of time to persuade England coach Stuart Lancaster that he should start against the Fijians on November 10.

"Ben Youngs should be available to play some part of the game against Sale," Tigers director of rugby Richard Cockerill told the Leicester Mercury.

"He is doing really well, has been doing contact training and his shoulder is in good shape. His rehab has gone really well."

Youngs impressed for England on their recent tour of South Africa, scoring twice in the second-Test defeat in Johannesburg, before suffering his shoulder injury when attempting to tackle JP Pietersen.

Despite the setback, it was a welcome return to form for Youngs, who had been dropped in favour of Northampton’s Lee Dickson for the final three games of the Six Nations.

The 24-cap youngster will now battle it out with Dickson and in-form Harlequins halfback Danny Care after the latter returned to the England fold in the summer following off-the-field disciplinary problems.