Beale handed keys to No10

Kurtley Beale will start at fly-half for the Wallabies this weekend. [more] 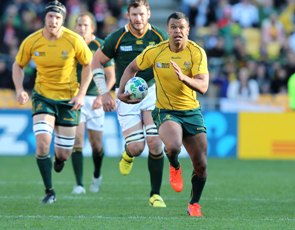 Kurtley Beale will start at fly-half for the Wallabies this weekend.

The star utility back has beaten Berrick Barnes to the No10 shirt for Saturday’s clash with South Africa in Pretoria.

Beale replaces Quade Cooper after his controversial team-mate aggravated a knee problem in the recent win over Argentina.

Rebels ace Beale has never started in the pivotal halfback role for his country but he has featured there for his Super 15 side this season.

His promotion to the playmaker’s position marks a huge turnaround in fortunes for the 23-year-old who has twice been dropped from the Wallaby line up in the inaugural Rugby Championship.

Beale endured a nightmare start in the tournament opener with the All Blacks in Sydney and was then far from impressive when he reclaimed his place at full back for the Round 3 win over the Boks in Perth.

He was only named on the bench for the Wallabies’ last outing on the Gold Coast a fortnight ago, with head coach Robbie Deans publicly questioning his form and fitness, but he is now being backed to lead the Lions’ next opponents to a first win at Loftus Versfeld.

"Obviously he had an outing that no-one enjoyed in Sydney but he's such a capable player he's never going to be down for long and he's really worked hard," said Deans.

"He has worked hard on the training track and is excited about the opportunity ahead.

"I'd never have any doubt about picking Kurtley anywhere. In terms of playing 10, it's not an issue – he's such an instinctive player.

"One of the challenges for him will be when to play and when not to because he's a bloke who does hang on to the ball, flatten up the line and take the game to the opposition instinctively very well and does it easily."

Beale helped the Wallabies create history in South Africa two years ago when his late, long-range penalty secured a first victory on the Highveldt in 47 years and Australia will be hoping for a similar impact with ball in hand this time around.

His selection ahead of the more pragmatic Barnes suggests the Wallabies will look to play a more attacking game than they have done so far in the competition.

The Wallaby backline was widely considered the best in the world prior to the 2011 World Cup and even Barnes is backing his replacement to reignite their obvious potential.

"He'll have a bit of a licence to have a crack out there because him touching the ball more is only going to help us as a side," said Barnes, who starts at full back for the second game running.

The only other change from the squad that survived a substantial scare to beat the Pumas at Skilled Park is on the bench where second row Rob Simmons comes in for Beale as Deans opts for a five-two split in favour of the forwards.

Hooker Stephen Moore was ruled out with a re-occurring hamstring injury earlier this week, while lock Sitaleki Timani has been struggling with a stomach bug that has reportedly seen him lose 5kg in weight.