Visser has Lions in his sights

Tim Visser says the 2013 Lions tour is one of his major goals despite the fact that he only made his international debut in the summer. [more] 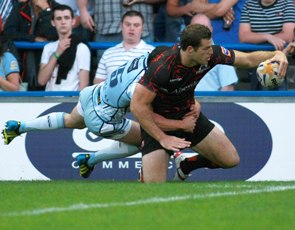 Tim Visser says the 2013 Lions tour is one of his major goals despite the fact that he only made his international debut in the summer.

The Edinburgh wing has been in sensational form so far this season, scoring six tries in three games at the start of the RaboDirect Pro12 campaign.

Visser has finished as the league’s top try scorer three years running and was rewarded with a Scotland call up when he qualified on residency grounds partway through the recent tour of Australia, Fiji and Samoa.

And now, having loved his first taste of top-level rugby, the 25-year-old Dutch-born flyer admits representing Britain and Ireland’s elite is the ultimate aim, even if he is fully aware that he has plenty to focus on prior to squad selection next spring.

“I’d be lying if I said the Lions tour wasn’t one of my goals,” Visser wrote on RugbyBlog.

“Every Home Nations player dreams of a call up for the tour, but all I can do is focus on Edinburgh Rugby and playing as well as I can, and then the rest will look after itself.

“I’ve been pleased with my form so far. Scoring six tries in three games is a great strike rate (I wasn’t involved against Leinster), but there’s so much more to rugby than scoring tries.

“I’m my own worst critic, and I know I have a lot to work on, particularly coming into the wet months over the winter – and here in Edinburgh, the weather certainly plays a part.

“(Edinburgh head coach) Michael Bradley keeps me abreast of the things I have to improve on and what will be important in the EMC Tests against New Zealand, South Africa and Tonga if I’m selected.

“I’ve only had a small taste of international rugby on the summer tour, and being able to play at Murrayfield Stadium in November would be incredible.”

So what are Visser’s chances of capping what looks like being another fine year with a place on the plane to Hong Kong and Australia next summer?

Well, you won’t find a more prolific scorer in these isles – Visser has notched 43 tries in 60 PRO12 games since joining Edinburgh from Newcastle in 2009.

Visser crossed the whitewash 10 times in his debut league campaign, 14 times in his second and 13 times in his third and is currently on target to smash those tallies this time around.

The fact that Visser only has two Scotland caps to his name so far doesn’t mean he will be starting the selection process as a rank outsider, either.

Although the Lions haven’t picked an uncapped tourist since Will Greenwood made the trip to South Africa 15 years ago, a number of players made the most recent adventure with less than a season’s international experience to their name.

Riki Flutey, Ugo Monye, Leigh Halfpenny and Andy Powell were all uncapped prior to the autumn internationals in 2008, while fellow November debutant Keith Earls still only had two caps by the time he toured with the Lions.

Even the likes of Tom Croft and Jamie Roberts only made their debuts in the 2008 Six Nations so Visser would hardly be breaking new ground if Warren Gatland did opt to take him Down Under.