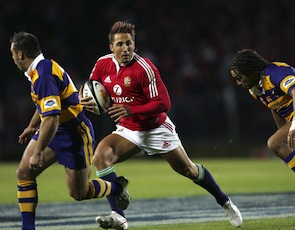 The Wales star has been out of action for more than a month after suffering minor fractures to his cheekbone in the Exiles’ pre-season loss to the Scarlets.

But he has returned to training and the English club are hoping to have him back for their first venture into Europe.

"Gavin is training with us at the moment," said head coach Lyn Jones.

"He's back on the field and running around, but just no contact yet.

"He's excited and we're all excited to have him back. We are just utilising him at the moment, and he's helping some of our back-three players improve their kicking and he's enjoying that responsibility."

The loss of Henson, who joined London Welsh after his contract with Cardiff Blues was terminated, was a major blow.

But the Exiles have still managed to win two of their first four Premiership matches.

Henson has enjoyed a glittering career but has also been hampered by injuries and off field problems.

He toured New Zealand with the Lions seven years ago, after inspiring Wales to a Six Nations Grand Slam, which he replicated three years later.