Not what the Wallabies wanted

The Wallabies endured an evening to forget in Pretoria as they were beaten 31-8 by the Springboks. [more] 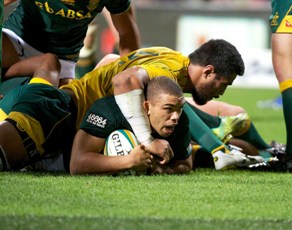 The Wallabies endured an evening to forget in Pretoria as they were beaten 31-8 by the Springboks.

The Lions’ next opponents shipped five tries and suffered numerous injury setbacks as they dropped below the Boks in the Rugby Championship table.

Bryan Habana crossed for a try hat-trick, with Zane Kirchner and Francois Louw also touching down at Loftus Versfeld.

Adam Ashley-Cooper left the field on a stretcher and in a neck brace after making a try-saving tackle just before half-time but the Wallaby full back did at least regain consciousness of the way to hospital.

But even without their continued bad luck on the injury front, the Wallabies never looked like recording a first win at fortress Loftus. Nathan Sharpe and co found themselves 14-3 down at half-time after conceding converted tries to Kirchner and Habana and, even with Kurtley Beale at fly-half, they created little of any note themselves.

Full back Kirchner crossed just after the half-way mark in the first period before Habana crept over on the half hour as the Boks put back-to-back defeats behind them in some style.

Beale did at least get the visitors on the board with a simple three-pointer late on but things got worse for the Wallabies as Ashley-Cooper appeared to take an accidental elbow to the head when attempting to haul down Kirchner.

Things went even further downhill for the Wallabies in the second period as Bath’s Louw powered over on 53 minutes. James Slipper saw yellow for slowing down Bok ball at the same time as Samo left the field with what looked like a shoulder or wrist injury and the hosts immediately took advantage.

Pienaar was just off target with the extras but Habana effectively killed the game when he streaked away for his second score on the hour. The former IRB Player of the Year took a quick throw, linked with hooker Adriaan Strauss and then sprinted clear for his 45th Test try, and a fine one at that.

The Wallabies did at least provide a spirited response for a few minutes in the last quarter as Beale finally began to show his class when the game got looser. Beale hardly had any decent attacking ball for much of his first start at No10 but he did demonstrate how dangerous he can be when he stood up his man and created a simple score for replacement Mike Harries.

That mini revival ended abruptly, though, when the Wallabies found themselves down to 14 men for the last eight minutes after Polota Nau went off injured. The visitors had already used seven subs so Saia Fainga'a couldn’t come on and any hopes of making the score more respectable went by the wayside.

Beale produced another moment of magic by catching his own chip ahead and then finding a sensational offload but it was the Boks who finished the stronger as Juan de Jongh went close before Habana grabbed his hat-trick at the death.