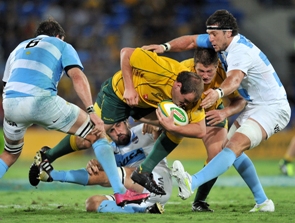 Australian preparations for next summer’s Lions tour have hit the rocks recently, with a five-try defeat to South Africa the latest disappointment of a frustrating few months.

The 31-8 Rugby Championship reverse in Pretoria was their third in five matches after a summer in which they lost to Scotland and were fortunate to scrape past Wales.

And now Slack, who skippered the Wallabies 19 times in 39 Test appearances between 1978 and 1987, admits the standard of rugby being produced simply isn’t up to scratch for a such a great nation.

"Fans have reason to expect more of players at that level, to expect better execution," said Slack, after the Wallabies slipped below the Boks in the IRB World Rankings.

"The amount of players not playing quality rugby is just not good enough. That is the bottom line.

"Injuries are never an excuse but when you lose players in the course of the game it does make it difficult, but Australia were not playing well before that.

"Nowadays is it perform or perish. People will be looking for a scapegoat and, rightly or wrongly, the responsibility for the performances rests with the coach.

Quade Cooper’s controversial comments in the lead up to the Loftus Versfeld Test were hardly helpful as far as the Wallabies were concerned but Slack has mixed feelings about what was said.

Slack is adamant that the mercurial fly-half was in the wrong in speaking out so publicly about his coach and the atmosphere within the Wallaby camp but he does admit to being worried that there may be more than a touch of truth in the outburst.

"I think it has been the messiest couple of weeks for Australian rugby in the professional era," added Slack.

"There has been no consistency of selection or style and I can understand as a player that can become very frustrating.

"While I don't think it has helped airing the laundry in public, Robbie's selection errors have got to the point where it is trying the confidence of the players and that is what Cooper is alluding to.

"But he hasn't shown any respect or loyalty to the players or the game in the way he has done this."