Tom Croft is still waiting to be given the green light to get back into contact training following his long standing neck injury. [more] 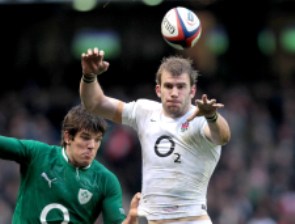 Tom Croft is still waiting to be given the green light to get back into contact training following his long standing neck injury.

The 2009 British & Irish Lions back row star picked up the injury playing for Leicester Tigers in April and is still not sure when he may be able to return to action – heightening fears he may miss England’s November internationals.

"It would be nice to get back fit and actually have something to train for at the end of the week. At the moment I am basically avoiding contact as much as possible,” Croft told espn’s scrum.com.

"I'm on track of where I'd hope to be at this time. It is frustrating at the moment watching the boys on the pitch, gearing towards a game at the end of each week and I'm stuck at the gym.”
Leicester Tigers director of rugby Richard Cockerill can’t wait to get his England star back into his side, while Lions coach Warren Gatland will be hoping to see Croft in action sooner rather than later.

With Dan Lydiate ruled out until the end of February with a leg fracture, and Sean O’Brien also re-habbing after surgery in Ireland, Gatland doesn’t want any more of his blindside options falling by the wayside.

He has Ulster’s 2009 Lion Stephen Ferris back in harness, James Haskell back in business in England and Edinburgh and Scotland’s rising star Dave Denton to consider, as well as another established name in Ryan Jones.

Other contenders will no doubt emerge during November and the RBS 6 Nations, but Gatland won’t want to find himself in the same position as next year’s coaching rival Robbie Deans on the injury front.