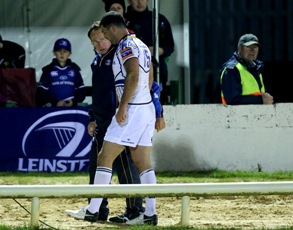 The 2009 Lion is struggling with a back injury that could see him sidelined for anything up to six weeks.

Kearney will definitely miss Leinster’s massive PRO12 clash with Munster this weekend, although his province remain hopeful that he will be back in action shortly after that.

"He's very uncomfortable. There's quite a bad haematoma there, with that bad blood being a real irritant, and hopefully as that drains away he should come right quite quickly.

"He won't be available for Munster but maybe beyond that we'd cross our fingers."

The Irish Independent offers a more pessimistic analysis, though, with the paper claiming that sources close to the Leinster camp believe he could also miss the Heineken Cup encounters with Exeter and the Scarlets, as well as the league clashes with the Blues and Ospreys.

The worst-case scenario of a six-week absence would also render him unavailable for Ireland’s game against South Africa on November 10.

Kearneyonly made his first appearance of the season last weekend but was forced off following a heavy tackle after making a mark in the comprehensive defeat to Connacht.

The 26-year-old featured in all three Tests for the Lions three years ago, coming on as a replacement for Lee Byrne in the first, scoring the opening try in the second and tasting victory in the third.

He still appears to be the favourite for the Lions’ No15 shirt when Britain and Ireland’s elite head Down Under next summer but he faces stiff competition from fellow Lion Leigh Halfpenny, as well as Scotland’s Stuart Hogg and England’s Ben Foden, while Mike Brown has been in fine form for Harlequins.