It may have been 124 years ago, but today is the anniversary of one of the most notable early victories by the British & Irish Lions. [more] 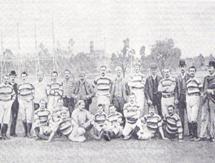 It may have been 124 years ago, but today is the anniversary of one of the most notable early victories by the British & Irish Lions.

On the pioneering tour to New Zealand and Australia in 1888, the first major overseas touring team in the history of rugby union (there had been two visits by New South Wales to New Zealand and one in the return direction) only two teams managed to beat the Lions.

The honour of becoming the first side to notch a win against the Lions fell to Taranaki Clubs on May 16 at The Racecourse, New Plymouth. A try by Mr H. Good proved the difference between the two sides in a game that ended 1-0.

Auckland then posted a 4-0 triumph over the tourists eight days later in the last of nine games on the first of three legs on the tour. Australia was the next stop for the Lions and they managed to remain unbeaten in their 16 games there before returning to New Zealand.

First up were Auckland, and a 3-0 win salvaged some pride in that game. Then came the return fixture with the Taranaki Clubs and a chance for further salvation before finally heading home.

The first Lions tour was a real epic adventure and the statistics make some reading:

35 Rugby Union games only matched once in Lions history, in 1966

Back in New Plymouth 124 years ago it was the brilliant Andrew Stoddart, who had taken over the leadership of the side after the tragic death by drowning of his fellow England international Robert Seddon, who led the revenge mission.

He scored the first of two tries and the Irish-born Arthur Paul added a conversion and drop goal. The win allowed the Lions to leave New Zealand a few days later with their heads held high.