Who'd be in Robbie Deans' shoes? The Wallaby coach is counting heads as he tries to put together a side for Saturday's Rugby Championship clash with Argentina. [more] 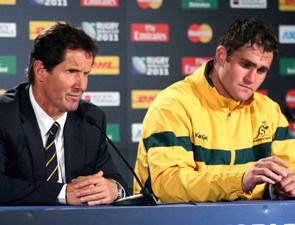 Who’d be in Robbie Deans’ shoes? The Wallaby coach is counting heads as he tries to put together a side for Saturday’s Rugby Championship clash with Argentina.

It means Deans will be going into the tricky encounter with the Pumas without two of his mainstays behind the scrum. Barnes has played in all nine Tests this year in three different positions, while Ashley-Cooper had managed the last eight, also in three positions.

But they will both be missing for the crucial outing this weekend and could also sit out the third Bledisloe Cup clash with the world champion All Blacks on October 20. Then there is the small matter of who Deans has left to bring to Europe for the four-Test tour in November and December.

Of the team below, there are 14 players who definitely won’t feature this weekend and to that list Deans might have to add Digby Ioane and Radike Samo as the Gods continue to make life more and more difficult for him. Only Scott Higginbotham has a hope of playing against the Pumas as he looks to recover from the back injury that forced him into a late withdrawal prior to the loss at Loftus.

This might not be the time to feel sympathy for the Lions’ next opponents, but perhaps the depth of the Wallabies’ injury crisis might explain the fact that they have lost four of their nine Tests to date this year. They did, of course, whitewash reigning RBS 6 Nations champions Wales in June, so the Lions certainly won’t be taking anything for granted.

We know that Ben McCalman is a back-row forward rather than a lock but he has played in the boilerhouse for the Force in the past. Prior to the start of this year, McCalman had featured in 18 of 21 Tests since his debut in 2010.

Second row Sitaleki Timani is currently struggling with a hamstring injury that saw him miss last Saturday's game so we could easily swap him in if needed!