Lawes looked at as a Lion 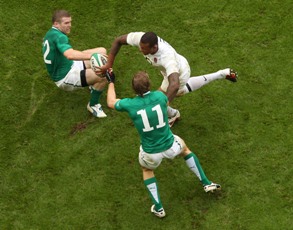 Grewcock won Test caps in 2001 and 2005, playing in all three internationals against the Wallabies and the first against the All Blacks, and fellow Englishman Lawes is hoping to follow suit in 2013.

Lawes’ last few months have been decimated by knee, shin and elbow problems that forced him to miss all but one game of the Six Nations and the entire summer tour of South Africa, but he finally returned to action in September and is being tipped to regain his England starting spot for the November internationals.

Grewcock admits time on the sidelines will have made Lawes’ route towards the Lions harder than he would have liked but he believes the 23-year-old still has a great chance of featuring in Warren Gatland’s squad announcement in the spring.

“It would be good to see him get back in that England jersey, and I’m sure anyone in the England jersey is going to be in a position to contest for that Lions shirt,” said Grewcock at an SSE Rugby Energy event.

“He faces a bit of a race against time I suppose but the way he was playing before he went down injured, he is definitely one to keep an eye on if he reproduces that kind of form.

“I think if we are looking from an England point of view from the second row then you don’t have to look any further than Courtney, even if he has been injured.

“England are in a very strong position with second rows. Some very talented lads there have all taken their opportunities with the likes of Mouritz Botha, Tom Palmer and Geoff Parling coming in.

“But Courtney was, prior to his injury, the number one guy in the second row. I think he was the probably the form second row for England for a very long time and his game was outstanding.

“He was breaking tackles, running with ball in hand and generally making a menace of himself around the pitch, finally conjuring up that bit of fear a second row needs.”

Meanwhile, Lawes’ Northampton colleague Dylan Hartley faces between one and two weeks out with a minor fracture of his eye socket.

Englandhooker Hartley suffered the damage in his club’s 24-6 win over Wasps last Friday and Saints boss Jim Mallinder confirmed he will definitely sit out Saturday’s trip to London Irish.

"The swelling has gone down but Dylan has got a hairline fracture of his eye socket," said Mallinder.

"He will be out short-term and he won't play this weekend. If we look after him, then he should be okay for a couple of weeks' time."