Dan Lydiate's hopes of making the 2013 Lions tour are far from over according to his club coach. [more] 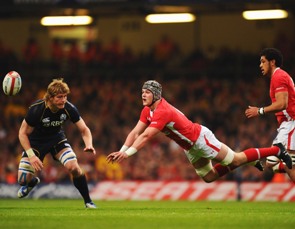 Dan Lydiate’s hopes of making the 2013 Lions tour are far from over according to his club coach.

Dragons boss Darren Edwards is confident the star blindside will be back in action in February or March, giving him time to press his claims ahead of Warren Gatland’s squad selection in the spring.

Lydiate suffered a nasty ankle injury in the PRO12 win over Edinburgh on Friday night and it was initially feared that he might miss the entire season.

But surgery on Sunday was deemed a success and Edwards says the current RBS 6 Nations Player of the Year could still feature in next year’s tournament.

“The length of his lay off could be a bit shorter than first expected, which is good news for us all,” Edwards told Wales Online.

“We are looking at him being back somewhere around the end of February, early March.

“It will depend on how his rehabilitation goes, but that does give him a chance of playing some part this season.

“I feared the worst at the time. But now he’s had his surgery, there’s more positive news for us.

“The good thing was that none of his ligaments were torn. That would have been a big problem if that happened. Now it’s just about bone healing.

Lydiate was facing stiff competition for a back-row spot with the Lions even prior to his injury so the predicted five-month absence is still a major blow to his hopes of securing a squad place.

But the fact that things seemed even more serious at the time, together with his previous success in recovering from a broken neck, mean the 24-year-old is taking a positive approach to getting back on track as soon as possible.

“It could have been a lot worse,” added Edwards.

“I watched the replay of the incident and you could actually see his leg go the way it did.

“It was quite strange for Dan. He is known for shooting through and following through on his tackles. With this one, he actually did a soak-up tackle and his leg got caught and he fell back on himself with two other guys. As he fell back, his leg got jammed and his fibula snapped just above the ankle.

“There’s always the shock element when things first happen. Dan is in better spirits now. He was obviously distraught when it first happened, but he can see there is a way out of this.

“The way he has recovered from injuries in the past has to be a source of encouragement. He has defied a lot of serious injuries, so there is no doubt about his mental attitude or professionalism. He has demonstrated that before and we are confident he will make a full recovery.”