Unlucky Lion has no regrets

One of the unluckiest names among the last lot of Lions says he has no regrets about his move from Ireland to England. [more] 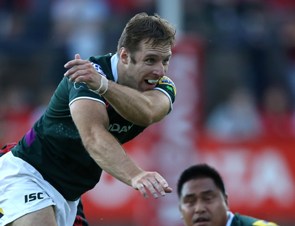 One of the unluckiest names among the last lot of Lions says he has no regrets about his move from Ireland to England.

Tomas O’Leary swapped Munster for London Irish this summer, just over three years after his Lions dream ended before it had even begun.

O’Leary’s fine form for his province and his Grand Slam winning country had seen him earn selection for the 2009 tour of South Africa but a nasty ankle injury just days after the squad announcement left him unable to travel to the Republic.

The 28-year-old has struggled to rediscover his best form in the seasons that have followed and he found himself down the pecking order with both Munster and Ireland.

That prompted an end-of-season switch to Reading but his new side have been out of sorts so far, losing four of their first five games.

It’s clearly not been the start O’Leary wanted yet he insists the move as a whole remains the right one.

"I have no regrets about the move," said O'Leary, who only featured twice as a replacement in last season’s Six Nations.

"I felt I needed a new challenge. Things didn't go too well for me at Munster last season and one of the reasons I left was to come and challenge myself.

"It's been a tough start in terms of results but it's a long, hard season and there are no easy games in the Premiership. I'm enjoying the competitive nature of the games.

"You don't envisage losing three or four games at the start but I knew it was going to be a tough challenge and I guess that's what I signed up for. I think as a team we will turn it around and hopefully we can give the supporters something to cheer about.

"It's a fresh start for me, it's the first time I've moved clubs but the boys have made it very easy to settle in and they've made me feel really welcome.

"I had a great few years at Munster – we won the Heineken Cup and a few league titles which was obviously a great experience. It was a privilege to have played for them.

"Hopefully if we can be a bit more consistent at Irish we can get a similar sort of success."