Tatafu Polota-Nau insists the pride in the Wallabies jersey will ensure Australia are firing on all cylinders for the Rugby Championship finale against Argentina. [more] 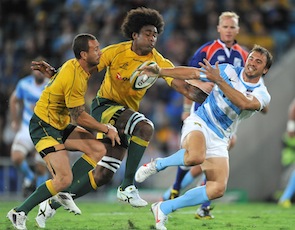 Tatafu Polota-Nau insists the pride in the Wallabies jersey will ensure Australia are firing on all cylinders for the Rugby Championship finale against Argentina.

The Wallabies crashed to a 31-8 loss to South Africa on Saturday and their Pretoria woes were compounded by a horrendous casualty list.

Berrick Barnes’ punctured lung was the worst of the injuries and he remains in South Africa, while Adam Ashley-Cooper, who was knocked unconscious, has flown back to Australia.

Radike Samo and Digby Ioane also suffered knocks but they have travelled to Argentina with the rest of the team, who have been joined by Melbourne Rebels lock Cadeyrn Neville.

Polota-Nau did not escape unscathed, and is struggling with a neck and back injury, but he is confident of making a full recover and expects the Wallabies to bounce back.

''What inspires me to play alongside those guys is just the character they showed for the whole 80 minutes,'' said the hooker.

''It would have been easy to give up a cricket score really but the guys hung in there, which was great to see.'

''There's nothing more honourable than to put the gold jersey on. We've said that from the start and it's shown what pride we have in that gold jersey.''

Australia edged past the Pumas in their first clash, thanks to a 17-point blitz in the final 20 minutes on the Gold Coast.

They reckon they are underdogs for the rematch in Rosario as the South Americans target their first win.

And forwards coach Andrew Blades admits his side must toughen up and take a leaf out of New Zealand’s book to finish the tournament on a high.

"To play against the Pumas well you first do the hard work and that's where we suffered on the weekend – around the tackle," said Blades.

"We need to improve well there to get momentum to play good rugby.

"We had a good look at the All Blacks and saw how the Pumas were able to frustrate them early in the game with their strong defence.

"The All Blacks adjusted well. They made sure they weren't caught short going wide before going forward and that was a lesson for us."