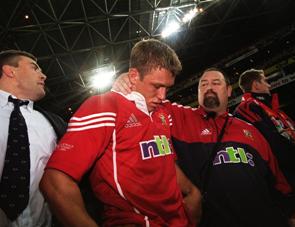 The former England fly-half was part of the heartbreaking series defeat in Australia in 2001, followed by the whitewash in New Zealand four years later.

And while the 33-year-old called time on his career for his country after last year’s World Cup, he could still feature for Britain and Ireland’s elite next summer.

Wilkinson admits a third tour is a big ask but he still dreams of finally putting the disappointment of defeat to the Wallabies to bed.

“In 2001, I sat in the changing-room after the third Test and it felt like a World Cup Final loss. As disappointments go, it was up there, definitely,” said Wilkinson.

“It’s niggling away at me. So much had gone into getting to a position of having a shot at it. It’s like trying to run a marathon, getting to the 25th mile and someone saying, ‘That’s it’.

“To complete one you need to go right back to the start, knowing how hard the 25 miles were and knowing you could fall after 10 miles next time, like we did in 2005.

Lions coach has already Warren Gatland refused to rule out naming Wilkinson in his squad to travel Down Under in 2013 – a decision that made plenty of headlines and drew a variety of responses.

But Wilkinson himself remains realistic about the prospect of wearing the famous red jersey yet again.

The ex-Newcastle star, who returned to Australia to kick England to World Cup glory two years after the pain of his debut Lions tour, admits he is behind the eight ball as far as selection is concerned.

“I’m not England’s mainstay fly-half, leading the team. All I can do is play and see if I fit into those plans.

“If I don’t, I’ll just have to make the best of what I’ve got here which, let’s face it, is good enough.

“It’s difficult for Warren Gatland. People are going to ask him questions and he’s going to respond with respect.

“I’m focused on having a massive season at Toulon, but selection is out of my control.

“I appreciate I’m playing in France – not so much out of sight, out of mind, but a little bit further away – and there are a lot of guys doing a lot of good things in Home Nations rugby at the moment.”

Wilkinson may be playing down his chances of being picked in a position for which the likes of Jonny Sexton, Rhys Priestland, Greig Laidlaw, Toby Flood, Ronan O’Gara, James Hook and Owen Farrell are all competing but he is certain about his attitude if the surprise call did arrive next spring.

“There’s no way I could say no. In terms of what that represents, everything about it, it’s enormous – such a fabulous thing.

“The joy is the fact it doesn’t have to come with international rugby. You start, you give it everything and you finish and say thanks very much.

“For me, that is the beauty of it. It doesn’t matter where you come from. You have got six weeks, get your boots on and get into it.”