Digby Ioane has warned Argentina they face an Australian backlash in Rosario. [more] 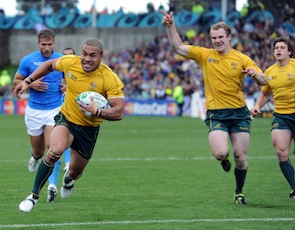 Digby Ioane has warned Argentina they face an Australian backlash in Rosario.

Ioane was knocked out in the clash and produced a below par performance but he is ready to make amends in the Wallabies final Rugby Championship encounter.

"For me I'm still hurting from the game," said Ioane. "I think a lot of the guys are – from the result.

"I got knocked out in the first half and tried to keep playing and that really rattled me in that second half.

"As a player I know I can offer more but I really can't get over my performance on the weekend.

"I couldn't do the things I normally do with the ball. After I got knocked it takes a lot out of you and I learned you can't continue and try to be a hero.

"But I just want to refocus and do my best this week."

Ioane overcame several fitness tests to be passed fit for the match but the Wallabies are still without 12 first team players.

The Queensland Reds star has been disappointed with the rough ride handed to the Wallabies by the media and disagrees with Quade Coopers claim that the in camp environment was “toxic”.

"I was surprised I guess but that's Quade and his situation. It's a bit crazy but that's his business. I've got nothing to say about him.

"It's a really good spirit … everyone has been tight and everyone is enjoying everyone's company but we just have to deliver on game day."