Nathan Sharpe has urged the Wallabies to act like men and not boys against Argentina tomorrow. [more] 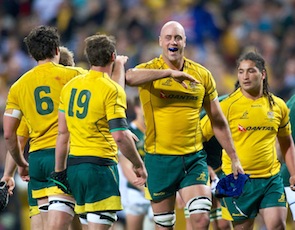 Nathan Sharpe has urged the Wallabies to act like men and not boys against Argentina tomorrow.

Australia enter the clash in Rosario severely under strength following a bruising encounter against South Africa.

The Wallabies are certain to face a red-hot atmosphere in Argentina and James Slipper has revealed Sharpe has rallied the troops ahead of the clash.

"We've got to be men not boys this weekend,” said Slipper.

“Sharpie has drilled into us the necessity to get our own game right No.1 and we are here to finish with a win.

"I woke up this morning and thought about just what we are up against. Going on how hostile the crowd is going to be, it's going to be a lot different to playing them on the Gold Coast last month.

"It's exciting. I just want to put my best foot forward because the majority of their game is based around forward play. We've just got to turn up as a front-row unit."

Slipper was sin-binned during the Wallabies bruising defeat in Pretoria but he has been handed the daunting task of packing down against the Pumas.

The prop is sure to provide a bigger ball carrying presence and the inclusion of Sitaleki Timani in the back row points to a confrontational approach.

"We’ve looked to increase our physicality to counter the direct force and the passion that will undoubtedly be coming the other way,” said head coach Robbie Deans.

“Not withstanding last week’s yellow card, James has consistently made an impact this year.

"Slipper will be starting while Robinson provides the fresh legs later in the contest."