Brian O'Driscoll has Australia very much on his mind, and not just in terms of a fourth Lions tour next summer. [more] 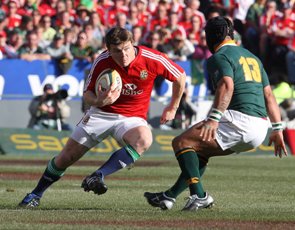 Brian O’Driscoll has Australia very much on his mind, and not just in terms of a fourth Lions tour next summer.

The joint second most-capped player in world rugby history with Ronan O’Gara on 126 appearances for Ireland and the Lions, O’Driscoll has told the Australian Daily Telegraph he fancies a stint in Super Rugby before he retires.

His current contract with the Irish Rugby Union and Leinster ends next summer after the Lions tour and the fact his former coach Michael Cheika has joined the Waratahs has added fuel to the fire.

"What excites me is the challenge of playing against the calibre of player you are playing week-in, week-out down there. That is an exciting prospect,” said the 33-year-old O’Driscoll.

“But whether all the pieces fit, I don't know. At this moment in time, probably not but 'Cheiks' has my number, so if he wants to give me a call, he knows how to get me.

"Just before the World Cup I thought about the possibility of last year maybe taking a little bit of downtime and playing a year of Super Rugby. The three best teams in the world make up the Super 15.

“You look at the individuals, the calibre of sides, the quality of Super Rugby and the intensity of it – obviously it is a hugely high standard. I am contracted only to June, so whether I play on for another year after that, the body will be able to tell me later on this year."

Cheika has a big re-building job to do with the Waratahs in Sydney and will spend the first half of 2013 trying to build a team capable of beating a Lions side he fully expects to include O’Driscoll.

"O'Driscoll is a class act both on and off the field and I'm sure we'll see that class from him during the Lions tour next year,'' said Cheika.

"Brian is a Leinster man through and through. Sydney is a long way from Dublin, so I'd say the only chance of him playing Super Rugby is if we kidnap him during our tour match against the Lions next June.