Steve Meehan has become the latest coach with British and Irish experience to face the Lions next summer. [more] 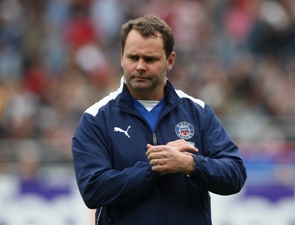 Steve Meehan has become the latest coach with British and Irish experience to face the Lions next summer.

The former Bath boss has joined the backroom staff at Western Force ahead of the 2013 season.

Meehan, will link up with ex Bath hooker and assistant coach Michael Foley who was announced as Richard Graham’s successor at the Force at the end of the recent Super Rugby campaign.

His appointment means the Lions will come up against a growing number coaches who know them particularly well, with Foley and Meehan at the Force, Graham at the Reds, Michael Cheika and Alan Gaffney at the Waratahs, John Muggleton of the Rebels, Laurie Fisher of the Brumbies and Tony McGahan with the Wallabies.

"We said that we were going to recruit the best attack coach available and that's exactly what we've done,” said Foley.

“With our focus on attacking and dynamic rugby, we're fortunate to bring in someone with the experience and expertise of Steve.

"His record at Stade Francais and Bath speaks for itself: he was able to implement a game style that players loved playing, that fans loved watching and that ultimately brought success. We have a similar goal for the side in 2013."

As well as leading Bath to their first trophy in a decade courtesy of the 2008 Amlin Challenge Cup, Meehan won plenty of plaudits for his free-flowing approach – a style that was in stark contrast to Bath’s philosophy under fellow Australian John Connolly.

Meehan left Bath at the end of the 2010/11 season, though, as Lions legend Sir Ian McGeechan took a more hands-on role at the West Country club.

He has previous experience of working in his homeland, having featured as a selector with the Queensland Reds U19 side, as head coach of Brisbane and then Brisbane Cyclone and as backs coach with the Combined States U19s.

The Queenslander joined French giants Stade Francais in 2002 where he worked under Nick Mallett and then Fabien Galthie and tasted Top 14 glory in 2003 and 2004.

He moved to Bath in 2006 and enjoyed five years at The Rec before being linked with jobs at the Waratahs and the Wallabies prior to his appointment by the Force.