England wing Chris Ashton admits his confidence has been shattered since falling victim to a nightclub attack. [more] 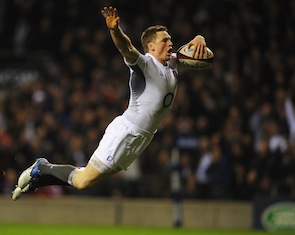 England wing Chris Ashton admits his confidence has been shattered since falling victim to a nightclub attack.

The 25-year-old flyer was ‘glassed’ by a stranger while on a night out with his Saracens players, and their wives and girlfriends, following the 9-9 draw with Leicester last month.

Ashton, who is one of the leading candidates for a wing slot on next year’s Lions tour, was fortunate to escape with minor injuries but the incident raised concerns over the safety of sports stars in the limelight.

And the Saracens star admits he is now wary of putting himself in situations which could lead to further altercations.

“There’s not much you can do about that,”Ashton told the Daily Telegraph. “It was one of those things. It could have happened to anyone.”

"You go into places now thinking maybe now's the time to leave. Or maybe not even go to them in the first place.

"You remember when you were 16 and you decided not to go out with your mates because you wanted to be ready for training the next day, maybe it's the same now, maybe it is best not to go out at all.

"Maybe you need to keep your head down. Not because you go out to misbehave, but because you are so much more visible. Unfortunately it took that experience to learn that. But sometimes that's the way."

Saracens kick-off their Heineken Cup campaign away to Edinburgh on Saturday and while that is Ashton’s immediate focus he already has one eye on England’s autumn series.

Stuart Lancaster’s men face Fiji, Australia, New Zealand and South Africa and Ashton reckons it will be a good gauge of the progress made.

“This autumn is going to give us a good idea of where we are,” added the former rugby league star.

“There comes a point we do need to start winning, we do need to take a step forward. We can’t keep making the excuse that we are inexperienced.”