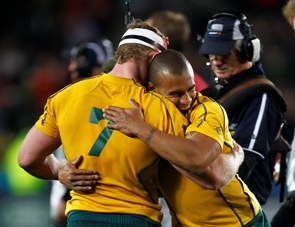 The Wallabies head coach has come under fire in recent weeks and the atmosphere in the international camp has been criticised with Quade Cooper branding it “toxic”.

But while he has stopped short of claiming the Wallabies’ 25-19 triumph over the Pumas was a turning point, he reckons it was of great importance.

“Those things are resolved down the path but there's no doubt some of the qualities they displayed in that game will be invaluable,” said Deans

"But it was very important, it was a great experience for this group.

"There were a couple experiencing their first starts in the backline and obviously there was a lot of youth in the side and it was a challenging circumstance, but they showed they fully understand what it's all about and played with a lot of pride and got the job done.

"We'll take everything of value out of it and there were some good things.

"Blokes who didn't have much background have played some good rugby. Most importantly the team really galvanised and came together and played for each other and that spirit was evident."

Despite the criticism levelled at Deans, he led the Wallabies to runners up in the inaugural Rugby Championship and they remain second in the world rankings.

But he insists the Wallabies must improve with another Bledisloe Cup clash with the All Blacks later this month.

"It's a good tournament…all the sides were competitive,” added the Kiwi coach.

"Every side gave every other side moments of anxiety but clearly the All Blacks have set the benchmark.

"They won the tournament, we came second which under the circumstances probably wasn't a bad effort but it's not one that we're happy with. You don't enter these tournaments to come second.

"Obviously we've got to improve to get that job done but we'll rest up and recover and really hone in on that opportunity.”